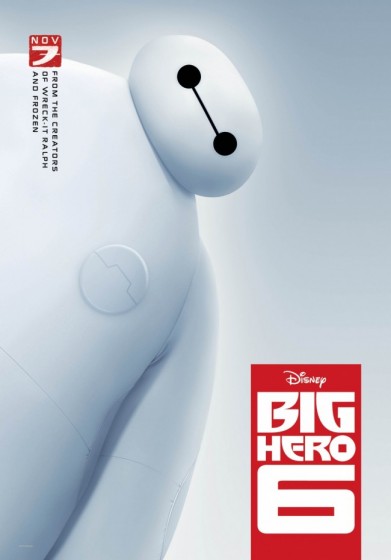 Disney’s animation studio is picking up the slack their Pixar colleagues have been letting slip. Wreck It Ralph and Frozen were huge successes, packing in the kids and offering quality family entertainment, though neither of those films approach the excellence of Pixar’s best (Toy Story, WALL-E, Up). But then, neither do Pixar’s recent ones.

Now we have Big Hero 6. Very loosely based on Marvel comic characters going back to the 1990s—but actually more stylistically indebted to The Iron Giant and Akira—this is a fitfully engaging animation, the appeal of which largely depends on the adorability of Baymax, an inflatable robot.

The younger brother is Hiro (Ryan Potter), 14 and lacking direction. Tadashi brings Hiro to his lab at the polytechnic school where he’s a student, and Hiro is bowled over by the resident nerds and their respective tech gifts: Go Go (Jamie Chung) and her magnetic discs, Wasabi (Damon Wayans Jr) and his lasers, Honey Lemon (Genesis Rodriguez) and her paint bombs, and Fred (TJ Miller) and his, um, dinosaur fixation. 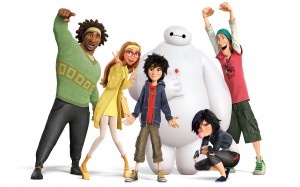 In order to get into the school, Hiro wows Professor Callaghan (James Cromwell) with his collection of mind-controlled microbots. But, following a tragedy, Hiro’s microbots are stolen by a mysterious masked villain. Hiro uses his tech savvy to weaponize the talents of those science nerds and, upgrading Baymax with a bunch of new features, the young heroes set out to identify and stop the villain.

Does that sound a little thin and obvious? That’s because it is. Worse, the unnamed villain has no personality, and his identity is no big mystery. He really could only be one of two characters. None of the other nerds really manifest beyond their distinguishing ability and a single character trait, if that—the very definition of one-dimensional characters.

Because of this, Big Hero 6 is the kind of entertainment that if you caught it one Saturday afternoon on the Cartoon Network, you might be diverted by its wit and action. But being asked to pay 3D prices for this? Ummm…

That’s not to say it’s a waste of your money. The hero kids are (almost) all nerdy scientists, and their gadgets are pretty damn cool. There’s a lot of optimism in this vision of the future, with greedy industrialists the big bad. A good message for the youngsters to digest.

The set-up (with Takashi and Hiro) and the portion of the second act devoted to Hiro and Baymax getting to know each other is pretty great—they’re the best animated buddy team since Hiccup and Toothless—though Big Hero 6 has none of the emotional impact of  the recent How To Train Your Dragon movie.

And Baymax is a wonderful creation, clumsy and loveable. When his battery winds down he becomes delightfully drunk. (“HAIRY baby!” he exclaims, picking up a cat.) And his interpretation of the fist-bump is classic.

I would have been happy to have the entire movie be about Hiro and Baymax hanging out in future metropolis San Fransokyo, a document of their madcap adventures as lonely Hiro learns about life as a nerdy teen as Baymax, his drunken wingman frequently on low batteries, helps him meet girls.

Instead we get the team-up-to-bring-down-the-bad-guy-and-his-microbots filling the running time, with that dull villain and a wildly predictable conclusion.

Here’s the thing that bothered me the most about this plot: If Hiro invented the microbots and the neural device that controls them, why didn’t he just make more ‘bots and a new control device for himself?  Fight fire with fire? It’s a shame that a film that goes out of its way to champion innovation and mindful thinking actively avoids the obvious for the sake of mindless action.