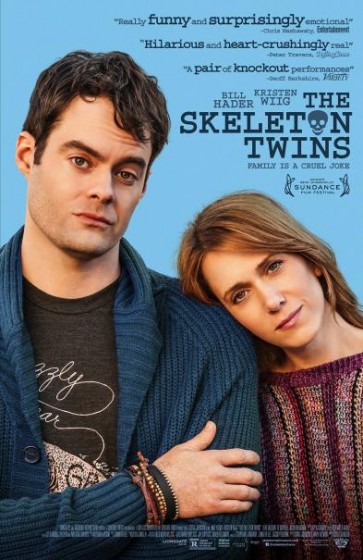 Directed by Craig Johnson, written by Johnson and Mark Heyman

Bill Hader and Kristen Wiig, the leads in this drama about suicidal siblings, are great together. We know that already—there’s an ease honed over years working together on Saturday Night Live. But just because they’re talented comics, and can deliver on the lighter moments in this picture, doesn’t mean they can sell the serious. And the under-developed script and bland direction does them no favours.

Hader is Milo, an unsuccessful actor living in Los Angeles with his goldfish. After a failed suicide attempt, he heads back to his hometown somewhere in upstate New York, where his sister, Maggie (Wiig), and her husband Lance (Luke Wilson), still live. Milo and Maggie haven’t connected in 10 years, but back when they were kids they were tight.  Maggie also has her own problems: she’s unhappy in her marriage, filling her time with extracurricular activities that cover up her extramarital affairs.

Hader and Wiig’s ease together goes a long way to making The Skeleton Twins watchable. They have a wonderful scene where they lip-synch to Starship’s pop nugget “Nothing’s Gonna Stop Us,” and another where they take a bunch of nitrous—Maggie is a dental assistant—and talk to each other in funny voices. That stuff is golden, but then that’s what you’d expect them to be great at.

The rest of it is iffy. I’m generally OK with genre cliches if they’re delivered with flair, but the indie family drama needs to work hard to feel fresh. That just isn’t the case here.

For characters wrestling with depression, Hader and Wiig never get dark or angry enough. Their charm might have been enough if the story actually went to those places it skirts, but it remains resolutely superficial. We never really understand why the siblings haven’t spoken in a decade. We get dappled, golden-light flashbacks that tell us nothing about the characters other than they were happier as kids. And there’s not a scene in the third act you won’t see coming from the second.  Maybe most egregious is the use of Moby Dick as cheap shorthand symbolism for about the zillionest time in movies.

The direction and production values are generic and style-free to a fault,  from the lighting to annoyingly plinky score to the locations. The upstate town they live in doesn’t even get a name, nor much of a sense of place beyond the fall colours. The use of stock footage of a Halloween parade sticks out from the rest of the picture due to the obvious difference in the film stock, another reminder of how dull the rest of the movie looks.

Because I like these performers, and I like to see actors breaking out of their pigeon holes and taking risks, I really wanted to like the movie. But The Skeleton Twins needs a lot more meat on the bones.