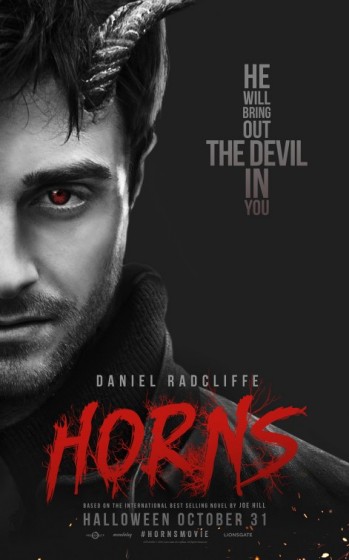 Directed by Alexandre Aja, Written by Keith Bunin from a novel by Joe Hill | 121 min | Amazon Prime, On Demand

Many movies fail from lack of ambition. Not Horns. Where it doesn’t work, it’s because it wants to be too many things rather than just settling for being something ordinary or mediocre. That’s actually something worth celebrating… to a point.

Here’s a question. is Horns…

A) A tragic love story?

B) A black comedy about secrets?

The answer is: All of the above.

I think if Horns had chosen just one or two of these things, even just three, it might have managed to do them well. But mashing all these elements makes for a movie that can’t find its tone with both hands. With the right kind of perception-alterers it would probably make a solid midnight movie curiosity.

Daniel Radcliffe is Iggy Perrish. The people in his rainy Washington State logging town all believe he murdered his childhood sweetheart, Merrin (Juno Temple), though he claims he’s innocent. His lawyer buddy Lee (Max Minghella) is going to represent him at the trial, while his parents (Kathleen Quinlan and James Remar) and brother (Joe Anderson) support him. Merrin’s father (David Morse) wants him dead and the server at the local diner (Heather Graham) is a witness for the prosecution. Meanwhile, state media is following Iggy as he drives around town in his miserable little AMC Gremlin.

After a night of drinking and renouncing all faith in any kind of god, Iggy grows horns. The rules around the power they give him are a bit fuzzy, but it seems they make people want to confess their darkest secrets to him, and it makes them forget they’ve done it. A handy talent if he wants to get to the truth of who killed Merrin. 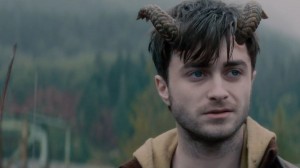 Peppered with flashbacks—some to childhood days with friends and some to sexy interludes with our fetching stars—Horns struggles to find its way from the get-go.  While Iggy manifests his power, the humour is ribald and adult and the laughs come thickly, but then we get scenes of dark revenge fantasy, Iggy’s aching sadness as he yearns for Merrin, pieces of the puzzle of what happened the night Merrin died, and the drama of the townspeople’s anger.

The supernatural and Christian mythological elements are interesting but muddled. The diner is called Eve’s (complete with an apple sign), all the cars’ licence plates’ numbers refer to scripture, and before long Iggy’s demonic powers have him controlling snakes and surviving fires.

All amounting to not very much. Props for originality, but I was left mostly confused by this mess. Whether it reaches you will likely depend on your appetite for the genres in play.