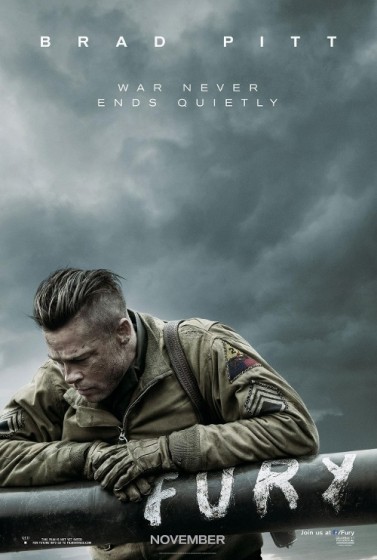 Written and directed by David Ayer

Ayer is what I call a macho director. I bet he’s seen every single one of Sam Peckinpah’s movies. He wrote U-571 , The Fast & The Furious, and Training Day, he wrote and directed End of Watch and Sabotage. He knows about guys, guns, and sweat, and that’s what Fury trades in—a balls-to-the-wall World War II movie about how unrelentingly awful it was to be in a tank. But Ayer’s unflinching gaze also revels in the hell it shares.

Logan Lerman plays Norman, fresh meat for the front lines as the Allies push into Germany. It’s 1945, the end of the war, and the Sherman tank crew he joins has already been in the shit—in Africa, France, Belgium, and now here. There’s Grady, the asshole on the ragged edge (Jon Bernthal), Bible, the god-fearer (Shia LaBeouf, who spends much of the movie weeping), Gordo, the driver (Michael Pena), and, in charge is Don Wardaddy (Brad Pitt). His job is to beat Norman into shape, which means making sure Norman quickly gets used to killing the enemy without remorse. Through the first act we bear witness to the grim realities of war through Norman’s eyes as he understands what’s required of him in the close-confines of the Sherman.

One of the things the film does well is make us feel the immediacy of what it’s like to be in those vehicles, with quick edits of shots of the men, their hands, and feet, as they load and fire weapons, reacting to commands given from Wardaddy in the turret. As it was with Ayer’s submarine movie, U-571, claustrophobes should probably go see something else playing. Maybe The Best of Me?

Another thing Ayer does well is stage powerful battle set-pieces. The sound editing and deft camerawork put the audience right in the middle of the fight between metal leviathans rattling across German fields, spitting fire, shells bouncing off their armour. An interesting visual effect is showing tracer bullets that register like laser beams in a science fiction movie. I have no sense of the historical accuracy of this imagery, but it’s effective.

I did wish Ayer was a little less heavy-handed with the way he uses his score, overemphasizing dramatic moments with swelling strings renders them hollow and borderline comedic. He needs to trust his audience to get it without being prompted.

For the opening hour Fury is definitely in the War Is Hell school of movies about battle—akin to Spielberg’s Saving Private Ryan: close-ups of men being squished by tank treads and limbs blown off. The movie’s central act is its high point, and it isn’t even in the tank— it’s an extended scene with Norman and Wardaddy in the apartment of two German women.

Pitt is an underrated actor, his ability sometimes obscured by his being a marquee movie star. One of his great gifts is his ability to simmer menacingly, a talent he showed in The Tree of Life and The Assassination of Jesse James By The Coward Robert Ford. He gets a chance to do some of that here, too, but we never doubt Wardaddy’s motivation is keeping his crew alive. And despite some cosmetic similarities, Wardaddy is not that other military man he played, Aldo Raine.

The third act of Fury drives hard into war movie cliches, obscuring Norman’s character arc in the smoke of his machine gun. That’s not to say the final, inevitable battle isn’t rousing, but it becomes less about the cost of survival, and instead plays off some pretty hoary ideas about heroism and sacrifice—along with god’s place in the hearts of fighting men. It suggests that glory is its own reward.

Saving Private Ryan made sure we understood the soldiers were constantly trying to work towards a specific greater good, saving the life of one important man. Peckinpah understood that too for the end of The Wild Bunch—a village needed protection and the men had no future. Ayer borrows more than one shot from The Wild Bunch. The problem with Fury is Ayer hasn’t managed to establish the emotional background or specific plot detail explaining why a last stand against an SS battalion is necessary, which undercuts the relish I think we’re supposed to feel in scenes where dozens of Germans are mowed down.

Can Ayer can have it both ways? I don’t know, but I can’t deny he concludes his film with a serious commitment to, as my father would say, blood and guts. It’s a movie with a relentless forward movement that sweeps you to an ending that fits its own armour-plated universe.

“Ideals are peaceful. History is violent,” says Wardaddy at one point. If Fury has a point, it may be that simple.