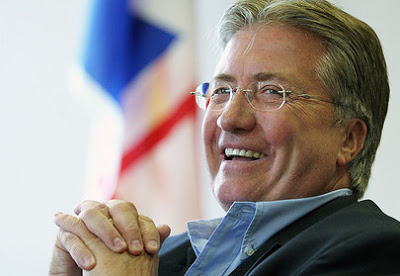 “He’s got the steeliest, green, nasty eyes,” says former Newfoundland and Labrador Premier Danny Williams of our long-running Prime Minister, Stephen Harper, to a packed house on Saturday evening in Park Lane Cinema 4. “And he’s a cold fish… I never liked him and I never will.”

Danny, the new NFB doc about his life and career, is a great yarn. Co-directors William D. MacGillivray and Justin Simms frame Williams’ life around confederation, Joey Smallwood, his love of hockey, his success as a lawyer and self-made telecommunications millionaire, and his decade as a politician, turning Newfoundland from a Have-Not to a Have province. His triumphant battles with the federal government, big oil, and ol’ Nasty Eyes himself are each given a fair amount of screen time.

The doc zips along, offering a lot of history well presented, and stuffed with great interviews with Williams’ political staff, Newfoundland comedians and storytellers, and even his outspoken, desk-dancing mother.

There’s no denying he’s the most beloved politician Atlantic Canada’s seen since Joe Howe. It’s probably a reflection of my own cynicism about politics that I didn’t quite believe it. If the worst thing anyone can say about Danny Williams is he’s stubborn and irascible, I wonder about the dirt that was left out. But that’s probably just me.

Since the beginning of this year’s AFF I’ve seen two solid works from local doc-makers at Tell Tale Productions, Bounty: Into The Hurricane and Santa Quest. Both were illuminating and engaging, with strong local connections.

The former looks into a sad but compelling mystery: Why did respect sea captain Robin Walbridge sail The Bounty, a tall ship barely able to stay afloat, into the heart of Hurricane Sandy? The local connection here is that The Bounty, a replica of the original—scuttled at Pitcairn island back in 1789 by Fletcher Christian and his fellow mutineers—was constructed in Lunenburg for the Marlon Brando picture in the early 1960s.

Through interviews with surviving crew members and sailing experts we get some idea of why Walbridge may have done it. We’ll probably never know for sure—the man went down with the ship.

The latter follows John Dunsworth—actor, director, all around local character—on his journey to a Santa Claus competition in northern Sweden. The doc allows Dunsworth—who found fame as Mr Lahey on Trailer Park Boys—to riff in his typically raucous style on what Santa means to people.

Dunsworth, despite his rowdy humour, is thoughtful about his role, though as he journeys through Italy and Finland in advance of the contest, he starts to find some clarity about the spirit of the season. His mother passes away during the course of the story, which provides an unexpected poignancy to a tale spiked with the kind of salty language one might expect from the guy who is Lahey.