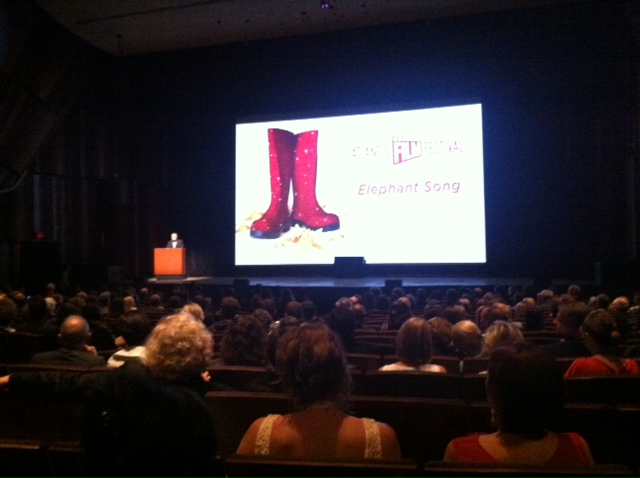 Well, the good news is that watching a movie at the Rebecca Cohn is pretty cool. Definitely a solid alternative to The Oxford for a red carpet event.

The bad news is Elephant Song is a dud.

What were the good people at the AFF thinking? Was this selection a political decision? Whatever the reason, it’s the worst Opening Gala film I’ve seen at the festival since I started attending. The woman sitting beside me fell asleep and started to snore 20 minutes in, and I envied her.

I can sort of see why they’d consider it as part of the program in general—it comes with some pedigree. Director Charles Binamé has a deep resume, including The Rocket: The Legend of Rocket Richard, and the cast is of serious quality, including Catherine Keener, Bruce Greenwood, and the white-hot Xavier Dolan.

But as a Gala opener, it’s baffles me that anyone would think it a good idea. You want a crowd-pleaser off the top, something that gets people excited for the festival, and almost everything about Elephant Song is dour and misjudged.

The set-up involves the disappearance of a psychiatrist in the late 60s from what they used to call an asylum. A patient, Michael (Dolan), is the last person to have seen him. The man in charge, Dr. Green (Greenwood), takes matters into his own hands, interviewing Michael about what he knows, despite the protestations of the head nurse on the ward (Keener). We learn that Green also has a dissatisfying personal life, with Carrie-Anne Moss his new wife (or sister, the film is startlingly unclear about the character relationships for long stretches) and niece back home complaining about a broken furnace on the day before Christmas.  All of this held together by a weird little framing device, where the principles are being interrogated for some reason that I don’t think is ever satisfactorily explained.

The story is largely inert. It sets up a Hitchcock-like structure, but keeps undercutting its thriller elements with long, dull exchanges between Dr. Green and Michael. Dolan’s Michael is presented as a pathological game-player, manipulating people for his own pleasure. I guess somewhere along the way we’re supposed to care about him, with the occasional flashbacks to his childhood and his obsession with elephants, but despite Dolan’s considerable charisma—at times he reminds me of Sal Mineo circa Rebel Without A Cause—the character stuff never takes root. The suspense around the disappearance should have been what drives the thing, but as we go along, the plotting all feels like a red herring so Green and Michael can get chummy with each other. And who cares about that?

The film has a crisp, digital austerity that feels like it’s wandered in from a commercial for wine or cruises up the Rhine. It’s also adapted from a play without the director doing much to open it up—a dead giveaway is that 75% of screen time is spent in a single, well-appointed office with characters wandering about switching on and off Christmas tree lights for no good reason.

After the screening I wandered into the Opening Party at the Cunard Centre looking for a drink to wash the bad taste out of my mouth. Fortunately, there were plenty to be had, and some were complimentary—the best kind—along with sushi, canapés, and chocolate. The chocolate was an especially good addition this year. I also appreciated the palm tree decor. Good times.

At the party I learned that Dolan, who was expected to attend the screening along with Elephant Song‘s director, writer, and producer, decided not to come at the last minute.

I’m glad the party was good, because otherwise it wasn’t exactly an auspicious beginning to this year’s fest.