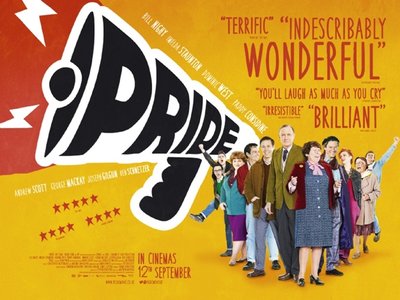 I’m a little confused by the many programs of Atlantic Shorts.

In previous editions of the AFF, the Atlantic Shorts were separated from the general Shorts and the International Shorts, all of which were separated from the Animation programs. Seems like they’ve all been gathered together as Atlantic Shorts, despite the fact that, say, Father, is by Jordan Tannahill, based in Toronto. Don’t know what to make of that, but maybe Jordan is psyched to be considered a Maritimer.

I saw the Atlantic Shorts 1 program on Monday. Of the 11 chosen, I really liked Heather Young’s Howard and Jean, though I’m a bit of a sucker for any picture featuring a chihuahua. Father had really impressive lighting and tone, and Bait, from Newfoundland, was a sharply written and performed two-hander starring Joel Thomas Hynes and Rhiannon Morgan.

They warned us when we sat down to see Winter Sleep. Three hours and 20 minutes. I can’t think of too many movies of that length that really deserve the beating such an epic running time gives my knees and ass. And I have to say, despite this Turkish drama arriving pre-anointed by the Palme D’Or, the highest honour of the Cannes Film Festival, it could have easily been an hour shorter.

That’s not saying it isn’t an impressive work: Directed by Nuri Bilge Ceylan, it’s set in Anatolia. A wealthy hotel owner and former theatre performer, Aydin, makes everyone around him nuts. His sister and much younger wife both resent him his arrogance and anger, though he seems so likeable (largely due to the presence of actor Haluk Bilginer), which makes it tough to tell whether their issues are valid. He’s also a big part of the community, contributing editorials to the local newspaper, being charitable, and renting property to folks who are struggling to make ends meet. Those people also get a lot of screen time, their fear, alcoholism and violence are presented in contrast with Aydin’s life of books.

I understand why the film earned so much love at Cannes. It’s a fascinating character study, and long swaths of dialogue devoted to conscience, self-awareness versus self-deception, and the role of faith and propriety in Turkish society. At times it feels a little like Chekov’s Uncle Vanya in Cappadoccia. It’s also frequently beautiful to look at, as we spend time in the stark, wintry landscape. But it’s also far too long.

I was looking forward to My Old Lady. The trailer sets up the scenario. Kevin Kline plays an American (Jim aka Mathias) who shows up in Paris to take possession of a flat left to him by his late father, but the apartment isn’t empty. A 90-something British woman, Mrs. G—the legendary Maggie Smith—lives there with her daughter, Chloe, played by Kristin Scott Thomas. A strange tradition in French real estate law allows Mrs G to stay there until death even though she no longer owns the place, leaving Mathias in a rough spot. He’s currently, and maybe chronically, short of cash.

The romcom set-up with Paris as a backdrop is fairly transparent. It isn’t long before Mathias is creepily stalking Chloe along the boulevards (to a jaunty, cliched accordion score), discovering her liaison with a married man, knowledge of which he immediately uses to blackmail her to try to get her out of the flat. He’s not exactly cuddly, this fellow. I’ve always found Kline more believable playing self-serving characters, so it’s not a stretch to buy him as an asshole.

The problem is, as the film rapidly moves from a formula romcom to the French melodrama, and Kline is required to really emote, we discover Mathias is both an alcoholic and a suicide danger. Fair enough on the former, but the latter? No way—he’s just too cocky, too self-possessed.

Events of the third act are painfully telegraphed in the first—do you think Mrs. G had an affair with Mathias’ pere? How do you suppose this knowledge impacts him? And what about Chloe? Might they be… related? There’s also a puritanical edge to the plotting, a baked-in presumption that the children of people who have affairs are destined to be dysfunctional adults.

Scott Thomas really gets the tough end of all this. We can understand why Mathias falls for Chloe, but given what a turd he is, how is it possible she could dig him? The movie never convinces us of this connection as they navigate the sibling possibility.

Despite the solid performances, especially from Smith, nice support from the always wonderful Dominique Pinon, and the dazzling Parisienne locations—a high point is a moment on the banks of the Seine where Kline encounters an operatic soprano airing her pipes—the film falls apart about midway through and never really recovers.

It’s a good thing I closed Monday with Pride, as it practically had me skipping through the streets on my way home. I should say from the start that when a film is described as “heartwarming,” alarm bells go off behind my ears. (They’re surgically implanted.) So it’s with real joy I can say that Pride is one of the few films I’ve seen in awhile that does heartwarming right. It ranks with Billy Elliot and Brassed Off as another great movie sprung from the fertile inspiration of the 1984-85 UK miners’ strike.

Based on a true story, it’s about a small group of London gay and lesbian activists who raised money for striking miners in rural Wales. They figured the cops and government were mutual enemies, so felt a strong sense of solidarity with the men from the pits. Perhaps not unexpectedly, it took some convincing for many of the miners to feel a brotherhood with the flamboyantly out gays and lesbians.

At the heart of this, aside from that wonderful notion that we can all get along no matter our sexual identities, is a fish-out-of-water story—the London kids spending some time in Wales and finding kinship,  that not all people in small towns are conservative bigots.

The script is just spectacular, mining laughs (yes, I did that) throughout its running time and presenting a group of living, breathing characters each with distinct personalities. I’m a little reluctant to single out any of the performers from the stellar group, but I really liked Dominic West, Menna Trussler, Imelda Staunton, Ben Schnetzer, and the always reliable Bill Nighy. Overall, I can’t think of a movie I’ve enjoyed this year with fewer reservations. Pride is so much fun.