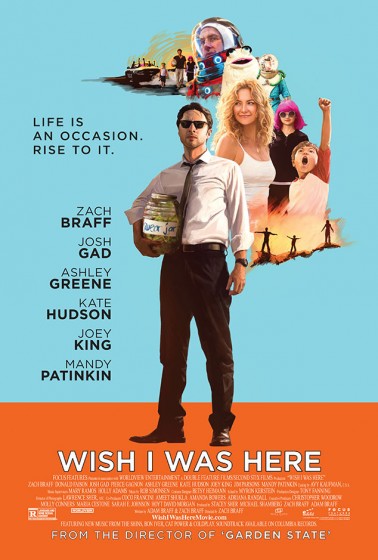 Directed by Zach Braff, written by Braff with his brother, Adam J. Braff

The reputation of Scrubs star Zach Braff’s first indie feature Garden State has taken some hits since it was a hit back in 2004. Braff became the punching bag as a representative of a certain kind of hipster cool, which I never thought he deserved. Yes, he may have some responsibility for creating the Manic Pixie Dream Girl trope, having cast Natalie Portman as the uber-cute, Shins-loving romantic interest. But I think what he was mostly trying to do was remake The Graduate for a new generation, and I found it hard to fault the earnest  attempt. There was truth in his portrait of an over-medicated 20-something guy coming back to his hometown, dealing with uncertainty and ghosts.

Now, having seen Wish I Was Here, his much postponed Kickstarter-funded follow-up, I now get why Braff pisses people off. If he had been sitting beside me in the cinema while I was watching his film, I’d have reached over and smacked him.

Wish I Was Here contains all the trite, shallow shit people said about Garden State. It’s about a guy named Aiden Bloom who doesn’t really have any problems but still expects the audience to sympathize with him when he complains. He’s an upper-middle-class actor struggling to achieve his Hollywood dream while he ignores his children and gets no sex from his overworked but lovely wife, Sarah (Kate Hudson), who supports the family. The first act is a bad sitcom, complete with syrupy music cues (where Moby was once the go-to soundtrack staple for this kind of movie, now it’s Bon Iver) and a scene where a man interrupts his adult son’s masturbation session.

Compounding my dislike for Aiden (and, correspondingly, Zach) is that his kids (Joey King and Pierce Gagnon, both solid) go to a fairly orthodox Hebrew school, paid for by his overbearing father, Gabe (Mandy Patinkin, pretty much all beard at this point). I guess Gabe failed to make his sons god-fearing so he’s hoping he has better luck with his grandchildren. Both Aiden and Sarah are non-religious, so I wonder why would they put up with their daughter and son being raised with values they don’t believe in? Something in the script here is really undercooked.

Oh, yeah, and Aiden has a brother, Noah (Josh Gad), a total nerd culture cliche. His thing is to construct a really cool space guy costume for comic con in order to have sex with a cosplay hottie (Ashley Greene). Braff also chooses to introduce Noah—who, by the way, lives in a disgusting trailer his mother left him, sitting on million-dollar real estate overlooking the PCH—to Bob Dylan’s “Tangled Up In Blue.” This is the single worse choice for a character-song pairing since someone thought Pierce Brosnan should sing ABBA. Noah also hates his father and refuses to see him, even when it’s revealed he’s dying of cancer. You think there’s a chance he might change his mind when Gabe is on his death bed?

I hope I’ve established how much there is to dislike in Wish I Was Here. I haven’t even gotten to the awful editing and continuity issues, including a scene in the desert where the sun keeps rising and setting.

But I’ll credit Braff for managing to lift the picture in the second and third acts from being a complete disaster.

First off, he puts the kids front and centre. While it isn’t entirely plausible that a guy who would go so far as to tie his children to a chair with electrical tape would actually have such a positive connection with his offspring, they do manage to have some sweet scenes together, including one where they test drive an Aston Martin.  As I mentioned, the child actors are both great.

And there’s a single scene between Kate Hudson, who’s better here than she’s been since Almost Famous, and Mandy Patinkin, that manages to find a note of pathos amidst a lot of cutesy smarm.

I wish I could say those small positives were enough to save the movie, but not even close. For most of the running time, I wished I wasn’t there.