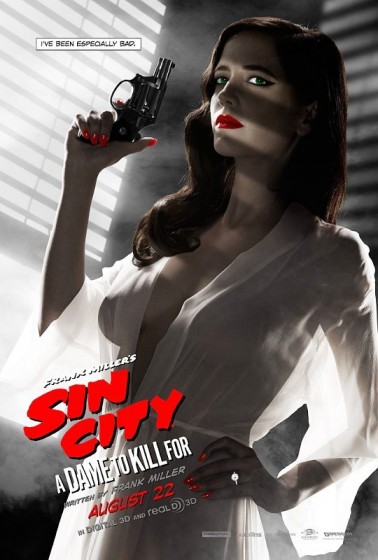 Yeah, I was disappointed Sin City: A Dame To Kill For, arriving nine years from the original. It very much matches the style of the first movie, which, back in 2005, was a whole bunch of fun. It turned Frank Miller’s stark, noir pastiche into a powerful comic book movie, drawing from the three best Sin City stories: The Hard Goodbye, That Yellow Bastard, and The Big Fat Kill. The amalgam of the three yarns—plus an intro and coda especially written for the movie—made for a unique graphic novel translation.

While the actual visual impact of the comics and the movies are pretty different—the comics are entirely black and white, no half-tones, while the movies are stylized black and white shot entirely against bluescreen—I was impressed by how faithful the movie was to the original narratives. There is a playfulness in its uncompromisingly violent OTT worldview, and I admired how the movie refused to pull any of the comic’s punches.

Now, for the sequel: Rodriguez and Miller adapt just one of the remaining Sin City stories, A Dame To Kill For, and for the most part are pretty faithful to it, too. That’s fine, but the problem is that its paired with two other stories that are a lot less compelling, both created for the film. One has Joseph Gordon Levitt as an unerring gambler named Johnny who runs afoul of Powers Boothe’s Senator Roark, a guy who doesn’t like to lose. The other is a continuance of That Yellow Bastard, about Nancy Callahan, the little girl once kidnapped by Roark’s son, who grew up to be a stripper played by Jessica Alba. She dances at the popular dive bar Kadie’s, frequented by Mickey Rourke’s Marv and Josh Brolin’s Dwight (played by Clive Owen in the first film). Nancy is obsessed with Roark, blaming him for the death of her saviour, Hartigan (Bruce Willis, who despite appearing as a ghost here, has aged noticeably since dying in the last film—even the afterlife can be hard on a guy in Sin City).

Part of the problem is the movie doesn’t do much to up the ante from the last one. If  anything, a lot of what happens here feels like we’re seeing outtakes from the last picture that were cut to reduce its running time, especially given the presence of Marv. He got The Chair in the first film, but given the convoluted chronology he’s back as a supporting character. He earns the film’s biggest laughs, but his presence alone just isn’t enough to engage. I feels like a lot more of the same.

The movie has one genuine high point: Eva Green’s electrifying presence single-handedly improves every movie she does. She makes this movie worth watching, like she did in  Dark Shadows and 300: Rise Of An Empire. It should be noted that Green plays manipulative femme fatale Ava, and has no qualms with appearing naked in almost every scene she’s in. She’s never been terribly modest (as the above semi-controversial poster indicates).  But I’d also like to point out that even if she didn’t take off a stitch, it would still be impossible to ignore her. She’s a scenery chewer in the best possible way.