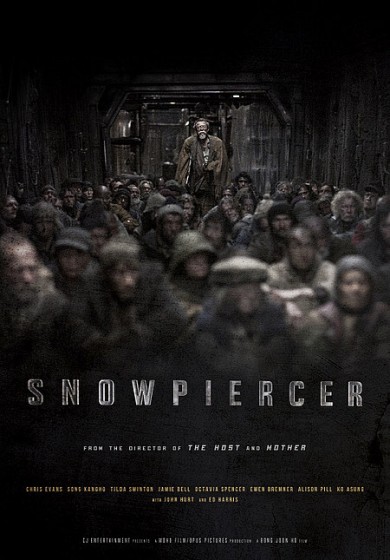 Directed by Joon-ho Bong, written by Bong and Kelly Masterson, based on the graphic novel Le Transperceneige by Jacques Lob, Benjamin Legrand, and Jean-Marc Rochette

In the sea of summer releases—many loud, over-budgeted and over-marketed—it’s sometimes easy to miss a gem that only gets shown in a few cinemas in North America before settling into internet-based distribution. That’s what’s happened to Snowpiercer. I don’t expect it to open here in Halifax’s Cineplex monopoly, which is a real shame. But it’s very much worth seeking out at your local computer terminal.

Based on a French graphic novel, Snowpiercer is what I like to think of as allegorical science fiction, where the high concept is so wildly impractical and fantastic it can only really function as a metaphor for something else. Last year’s Upside Down was one of these kinds of stories. In this case, a post-apocalyptic train running through wintry wastes stands in for our modern society barrelling into the unknown future, with our rigid and unbreakable class systems sustained by wealthy white folks who control all the remaining resources.

The train is a designed by a Hughes-esque scientific genius named Wilford. He predicted the end of life on earth when we tried to use chemicals in the atmosphere to control climate change, throwing the planet into a devastating ice age. Only the lucky few who boarded the “unstoppable” train were able to survive. Seventeen years later and people in the rear of the train are on the verge of revolution, living in miserable, sunless squalor, subsisting on “food”—a disgusting protein jelly—provided by Wilford’s on-board tech. Revolutionaries include nominal leader Gilliam (John Hurt), his right-hand man Curtis (Chris Evans), along with Edgar (Jamie Bell), Tanya (Octavia Spencer), lock-breaker Minsoo (Kang-ho Song), and clairvoyant Yona (Ah-sung Ko) . Keeping them “where they belong” is Mason (Tilda Swinton, rocking a northern England accent and terrible teeth) and her jackbooted thugs.

Curtis leads the revolt, moving forward through the train, encountering well-armed resistance and battling through a series of gorgeous and bloody slo-mo entanglements. Our fighters’ eyes are opened to the grim truth of the way their mobile world works, both the functional (industrial food processing) and the wondrous (enormous aquariums), before being exposed to the standard of living of the more privileged classes. (And a great cameo by Alison Pill as a prepared-for-anything elementary school teacher.)

When they finally encounter the man at the head of the beast, Wilford’s revelations unravel many of the threads of optimism and belief that went before. And all this while the wild ride of an action movie delivers thrills in sets both vivid and opulent. It is a bit unfortunate, then, that anytime we get to look outside, the CGI is hardly up to the task to envision a believably frozen world, let alone a train that may be kilometres long.

Snowpiercer isn’t perfect but it is a genuine surprise.  It’s structurally more unique and creative than most of the escapist fare we’ve had to sit through this summer, if only because it has much more to say about how we live today.  It’s not light viewing, but I’d wager people will be rewatching it, and discussing it, long after the apes and transformers we’re being offered are long forgotten.