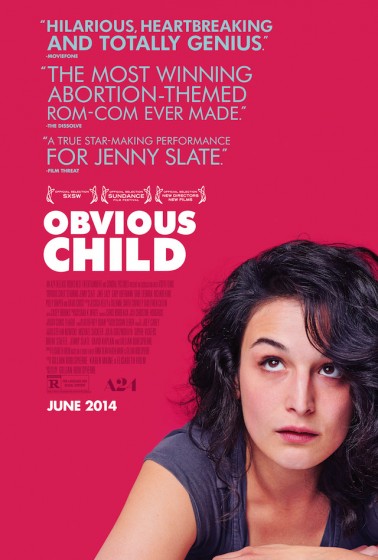 I can’t tell you how great it is to see a film like this with characters who speak like people I know, about the politics and reality of modern life for women and men. The film feels like a bit of whimsy in some ways, but I appreciate its courage in staring in the face a subject that people deal with daily: women get pregnant and they have to manage the reality of that situation. It needn’t always be a tragedy, but it’s certainly an emotional thing, and I think Obvious Child gets it right.

It doesn’t start all that promisingly. There’s a too-cute first-act set-up of hipster Brooklyn and dialogue out of a Saturday Night Live skit. That impression might be at least part due to the screen presence of the lead, Jenny Slate, who was on SNL for a year and here is playing a stand-up comic named Donna Stern. When we meet her she’s getting dumped by her asshole boyfriend and losing her retail job—the bookstore she works at is closing. The first 15-or-so minutes is filled by her misery as she kamakaze-calls her ex, stalks him, and seeks solace from her best pals (Gaby Hoffmann and Gabe Liedman) and supportive divorced parents (Richard Kind and Polly Draper), finally getting drunk at a bar and staging a one-nighter with the very square dude (Jake Lacy) she picks up. That seems to lift her spirits, at least until the pregnancy.

Happily, this is about when the film expands beyond the quirk and the characters start to manifest as real people. Especially Slate, whose Donna nicely blossoms from a quip-delivering comedian with a crummy lovelife to a woman dealing with some real stuff.

Unlike movies about unplanned pregnancy like Juno or Knocked Up, the thing that impresses me most here is that the characters have a real conversation about abortion. It’s not really about whether Donna goes ahead with it or doesn’t, but that its genuinely on the table as an option.

That was maybe the thing I liked least about Knocked Up, a movie I generally enjoyed otherwise, was that the Katherine Heigl character went directly from “Wow, I’m pregnant and freaking out” to “I’m keeping this baby,” without crediting her (or the audience) even a scene of “Maybe I should terminate the pregnancy?” I know it’s a hot-button issue in the States and Hollywood entertainment tends to pussyfoot around this stuff, but come on. There’s a point where not acknowledging the reality of modern life becomes insulting to the audience.

Hoffmann’s supportive roomie gets to say the thing that so many of us have been waiting to hear in an American movie, the thing about the system and women’s bodies. It’s so refreshing. (I managed to not be totally distracted by Hoffmann’s eyebrows, as I am in every scene she shows up in on Girls. ) And the supporting cast is uniformly good.

Maybe my favourite scene is one between Donna and her mother, where Donna comes clean about the trouble she’s in and receives an unexpectedly gentle reaction. It reminded me a great deal of that heartbreaking moment in Kissing Jessica Stein where Heather Juergensen and Tovah Feldshuh talk on the family porch, which is a credit to both Slate and Draper that they can reach a similar level of authenticity.

And, by the way, another way in which Obvious Child has something in common with the work of Seth Rogen is in the body-function humour. There are a bunch of fart jokes. I’m just letting you know.