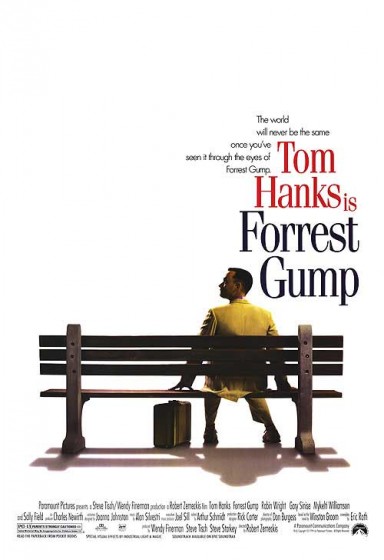 I hated this movie.

When Forrest Gump came out 20 years ago this weekend, I was really annoyed by it. I saw it in Ottawa, and I remember exiting the cinema just cheesed off. I wasn’t even sure what it was that bothered me so much, just the distinct feeling I’d been proselytized to. Next to the Michael Douglas picture Falling Down from the year before, I don’t remember a movie making me so angry.

When I thought about it some more, I realized my problem was mostly with the subplot involving Jenny, Forrest’s true love, played by Robin Wright. She was a thoughtful and independent woman who went her own way, and was rewarded for it by illness and death. The implication? If she’d just stayed with simple, innocent Forrest (Tom Hanks) and been a good wife instead of being a free-thinking activist she never would have caught that nasty AIDS virus.

There was more to the politics of the thing, as this interesting piece gets into, but that was the crux of the issue for me.

At the Academy Awards in early 1995, insult was added to injury when Forrest Gump won Best Picture over four stellar and more deserving films: Pulp Fiction, Four Weddings And A Funeral, Quiz Show, and The Shawshank Redemption. Classics in their own way, every single one of them. Arrayed against that collection the slab of conservative Americana wins the day? Bullshit, I said, and I’ll say it again this Fourth of July, with much love to my friends to the south.

A few months ago I happened to stumble across Robert Zemeckis’ award-winning film while channel surfing. I watched a good portion of it. I was still bothered by the politics, but I have to admit I found myself enjoying it more than I had in the past. Forrest Gump has charm in an innocent who finds himself meeting the key figures of the age, and doing all kinds of wacky, unpredictable things with his life. It’s  Woody Allen’s Zelig for the heartland.

And, lets face it, Tom Hanks is wonderful in the lead. Compare this role to Andrew Beckett, the character he played the year before in Philadelphia. Hard to believe it’s the same person, isn’t it? His Oscar was deserved.

There’s something to be said for movies that catch the zeitgeist. A movie like this is a cultural event, and there’s no arguing with it. It’s exciting when Hollywood can produce something that registers loudly, whether it’s Gump, Titanic, Slumdog Millionaire or Frozen. I had ambivalent feelings about all of them, but I can’t deny their power, a broad resonance with many kinds of audiences.

But I will continue to deny that life is, in any way, like a box of chocolates.