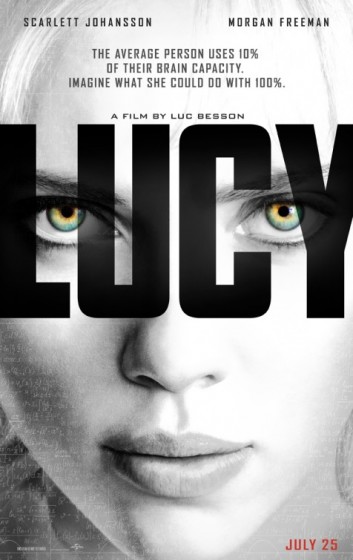 Written and directed by Luc Besson

I don’t think I’ve ever used the word “gawp” in one of my reviews, but here we go: I couldn’t help but repeatedly gawp at the screen while watching Lucy.

Early on, French director Luc Besson feels it necessary to splice a stock footage of a mouse approaching a cheese-laden trap, along with cheetahs zeroing in on an impala on the Serengeti, to better illustrate the tough spot Scarlett Johansson’s American student in Taipei has gotten herself into. Because we really need those kinds of pedantic metaphors to understand what’s fundamentally going on here. Cue the gawping.

But, at the same time, I had to chuckle at the attitude on display.

The entire, silly plot is based on a totally spurious bit of science suggesting humans only use 10% of our brain power. Besson gets Morgan Freeman to play a renowned scientist, lecturing on the subject to a hall full of attractive students about what might “theoretically” happen if we could use more of our grey matter than that: controlling our bodily functions, controlling others, controlling electricity, matter, energy, and perhaps even time itself. It’s funny, when Freeman says it, you might actually start to believe the hogwash. The guy has the living Voice of Authority.

Sure enough, Lucy starts to exhibit crazy inhuman powers. It’s her brain, expanding its capacity. We know this because we regularly get on-screen updates on her rising brain function in percentages. When these Taiwanese gangsters try to turn her into a drug mule, inserting a bag of some synthetic blue stuff into her abdomen, the bag splits and the drug reacts with her chemistry, instantly turning her into a robotic superhero.

And that’s pretty much what Lucy is, a superhero origin story. It’s impossible to take seriously, from its leaps of logic, pseudo-science and vague character motivations, to its totally naff bits of dialogue.

But, wow, talk about the dictionary definition of a guilty pleasure.

Johansson has become the new Angelina Jolie (who I gather was once in line for this role). Like Angie, we’re so used to seeing Johansson playing larger-than-life characters, we immediately buy her as a human whose super drug-addled cerebellum allows her to levitate objects, control her own body’s molecular cohesion and turn into a living zip drive.

And we buy it at least partly because Besson serves up the action sequences with the verve of a filmmaker who knows in his glossy, black heart that kinetics overrule logic. It’s why people love The Transporter series (that he wrote and produced): We don’t care that cars can’t actually do that stuff. It looks cool. Jason Statham is cool.

And so is Scarlett. Put her in a sexy outfit, her glowing eyes hidden behind designer shades, spin out some technobabble, and then have a cadre of heavily armed Asian baddies chase her across the globe. People dig that. They’ll probably even ignore the problematic racial optics.

Lucy is a cartoon—there were times the movie reminded me of both Akira and Looney Tunes—but there’s no denying it’s an entertaining one.