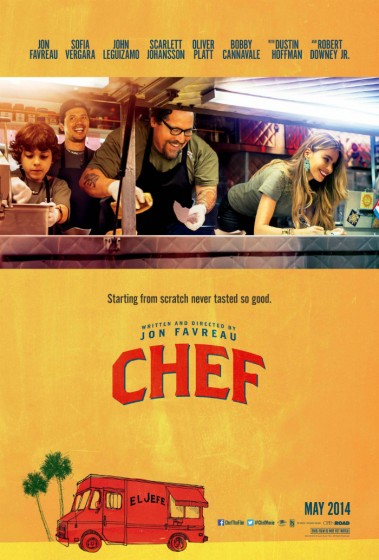 Written and directed by Jon Favreau

It’s tempting to analogize the story of Chef with Favreau’s career as an actor and director. Favreau came to prominence as the writer and star of the late-90s indie Swingers, with his buddy Vince Vaughn (they paired again in Made),  which he parlayed into acting and directing gigs. He was behind the camera on the hit Christmas movie, Elf, and the first two Iron Man pictures, dancing with multi-million dollar budgets. Iron Man 2 was underwhelming, and that was followed by Cowboys and Aliens. Since it was also a critical and commercial disappointment, the only directing gigs he’s landed have been on TV. Now we have Chef, his indie return, the story of a guy who made a big splash early in his career, had to compromise his passion working for the man, and rediscovers his creative knack by going back to basics.

But real life comparisons aside, Chef is a good time. It’s the rare dramedy that starts a bit rocky but, as it goes along, finds its footing. It’s also very likely the most fun foodies are gonna have this season at the cinema.

Carl Casper (Favreau) is a chef at an LA hotspot. He’s better in the kitchen than he is a dad—his 10-year-old son Percy (Emjay Anthony) is always looking for a part of his scattered attention. His ex, Inez (Sofia Vergara), takes care of the boy for the most part,  while Casper lives the life, doing shots of tequila after work with his brother Tony and buddy Martin (Bobby Cannavale and John Leguizamo, respectively), and making time with Molly (Scarlett Johansson, the hardest working woman in show biz this year, in six features over the past 12 months), all of whom work at the same restaurant.

But when a big time food critic (Oliver Platt), who championed Casper early in his career, comes into the place to check out what he’s cooking these days, things sour. The restaurant owner (Dustin Hoffman, sleepwalking through his three-scene role) wants him to cook off a set menu, but Casper wants to get creative. Following a Twitter war and an embarrassing public display (captured on YouTube, natch’), Casper is fired and has to reassess both his career and his relationship with his son. Cue a trip to Miami and a food truck, followed by the solid third act where Chef becomes a road movie.

As I mentioned, I wasn’t sold right away. The choppy editing and a bit too much soundtrack-as-shorthand montages of Casper chopping herbs and veggies didn’t really offer enough interest for me. I’m not a card-carrying foodie, and while I certainly found a lot of the movie’s delicious dishes mouth-watering, endless scenes of food prep isn’t my thing. Those who love such things will be thrilled at the skill on display, I’d wager, and at least I now understand how to make the perfect grilled cheese sandwich.

An inordinately large amount of screen time is spent explaining how social media works, information Favreau should have assumed the audience already has, even if Casper doesn’t. The other day I was grousing about how texts were represented in The Fault In Our Stars—I think Chef does it much better, but the repeated Twitter branding is a little hard to take. The 140-character internet juggernaut must have been an investor.

The key relationship here is between Casper and son Percy. Anthony is especially good as the kid—he manages to be neither annoyingly precocious nor a wiseass. Leguizamo reminds us what a pleasure he can be onscreen, and Robert Downey Jr. drops in for a hilarious one-scene cameo that threatens to capsize the entire movie. He really is the biggest movie star in the world right now—his Downey-esque energy is addictive. I kept hoping he’d show up again.

I had a little trouble imagining Jon Favreau and Sofia Vergara as having ever been a couple, I have to admit. She’s like the second coming of Sophia Loren and he’s, well, a bit of a shlub. Credit to Vergara that she convinces as someone who genuinely cares about Casper, envisioning and encouraging his potential. And he does have a certain confidence—the movie is definitely telling us there’s something appealing about a guy who knows how to cook.

If the ending is a little too crisp, it doesn’t spoil what came before. I came out of the screening both satisfied and hungry—a good combination.