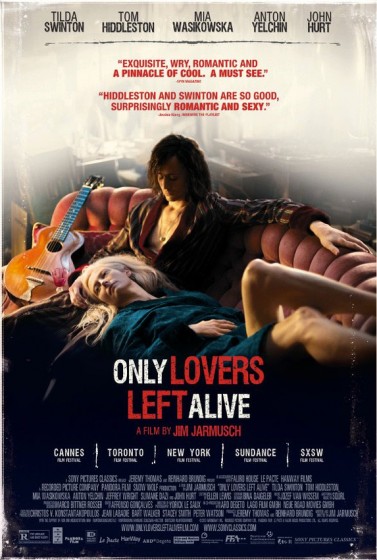 Written and directed by Jim Jarmusch

Ah, the welcome return of the godfather of American indie film. It’s a real delight to see something new from Jarmusch.  For those who don’t know his stuff, he’s best known for languid, atmospheric features low on plot but high on characters skirting the margins of society. His films include Stranger Than Paradise, Down By Law, Night On Earth, Ghost Dog: The Way of the Samurai, and Broken Flowers.

Only Lovers Left Alive is soaked in his trademark wit and drunk on his storytelling ease. It’s also one of the best vampire films I’ve seen in a very long time. It’s a film you sink into.

It presents vampirism as analogous to heroin addiction. It’s a perfect comparison, especially couched in the Velvet Underground/New Romantic rock and roll milieu. Yes, there were moments I was reminded of Tony Scott’s The Hunger, but unlike that style icon of the 80s, this picture wears its self-awareness on its arm like a dagger tattoo. And it’s more fun.

Eve (Tilda Swinton) lives in Tangier—a quiet, nocturnal existence where her friend Marlowe (John Hurt) provides her the blood she uses to get by. Though she’s deeply in love with her cult musician husband, Adam (Tom Hiddleston), he lives far away in the most run-down neighbourhood of Detroit where he’s feeling like “all the sand is at the bottom of the hourglass.” He has a star-struck acolyte, Ian (Anton Yelchin), secure the things he wants : guitars and analogue recording equipment. A local doctor (Jeffrey Wright) sells him plasma he needs. These are bloodsuckers who are content to exist alongside people, to disturb them as little as inhumanly possible. What a bother, otherwise. After all, it’s us humans—”zombies,” they call us—who’ve destroyed the planet, poisoned both the blood and water.

Eve is concerned that Adam’s natural melancholy is driving him toward suicide, and flies to see him. Meanwhile, her troublesome “sister”, Ava (Mia Wasikowska), makes the Motor City scene, taking a break from her endless succession of Los Angeles nights.

And so it goes—this isn’t a story where a synopsis of plot tells you much about the film’s delicate, amorphous pleasures. Those are found in the soundtrack provided by Sqürl, Jarmusch’s band, as well as other incidental music by folks like Wanda Jackson, Charlie Feathers and Black Rebel Motorcycle Club. They’re in the film’s irresistible twilight and neon corners, the humming of Adam’s pale white Jaguar XJS as it prowls poorly lit Detroit streets, the exquisite decay of Adam’s mansion with its piles of books, jungles of wiring, and forests of frayed rugs. They’re in the subtle tongue-in-cheek of lines like, “That was visual,” after our vampire couple watch a body dissolve in acid, and the lovely, dusty romance between two people too familiar with one another to harbour any relationship insecurities.

It’s mostly Tilda Swinton’s picture. On his own, Hiddleston doesn’t do much more than mope. But together the pale, undead couple is  wonderful. Wasikowska isn’t in it long enough to manifest as more than a pest, but Hurt reminds us once again why he’s one of the great British actors.

Only Lovers Left Alive made me want to smoke and drink, which is one of the highest compliments I can pay a movie.