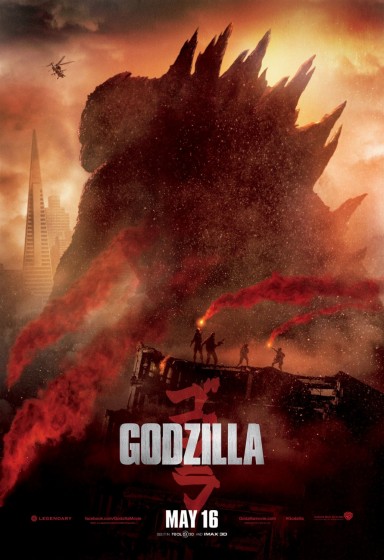 Directed by Gareth Edwards , written by Max Borenstein, from a story by David Callaham.

Well, folks, Godzilla is here. The beloved gigantic radioactive lizard with the fiery breath is the star of his own American movie once again. Those of you with fond memories of the Toho Studios movies going back to the 1950s or the Hanna Barbera cartoon from the 1970s—even those with unpleasant memories of the 1998 Hollywood version— can more or less rest easy here. First and foremost this is, despite some plotting issues, a satisfying monster movie.

Following an excellent title sequence that inserts those tell-tale spinal ridges emerging from the ocean in stock footage of 1940s and 50s nuclear tests, the movie doesn’t start all that satisfyingly. We’re in Japan, 1998, when a nuclear accident limits the Oscar-winning Juliette Binoche to not much more than a cameo, and turns Bryan Cranston’s scientist into a raging/crying obsessive: “That was no accident,” he insists to anyone who will listen. The Japanese government and the mysterious multinational Monarch are hiding something! With the help of his son, Navy man and bomb-disposal expert Aaron Taylor-Johnson, they find out it’s true—a weird parasite hatched in the South Pacific turns into a radiation-eating 10-storey tall insect. This thing doesn’t have a name, and neither does its mate, who shows up presently. But they call them both, collectively, the MUTOs. (Massive Unidentified Terrestrial Organisms.) Great acronym.

The reason this opening act is flabby and uninteresting is largely due to the script, which is all dry plotting and dull line-readings from the cast. Taylor-Johnson is especially uninteresting, and I couldn’t help thinking that if he and Elizabeth Olsen, who plays his wife, had swapped roles, it would have made for a much better movie. Even though she’s not in it much, Olsen’s face registers actual fear and wonder, where Taylor-Johnson’s remains mostly stony for the duration.

Working for Monarch are Sally Hawkins and Ken Watanabe, who are skillful in handling the bulk of the exposition a movie like this requires to allow even a modicum of believability. They’re what Bob Balaban and Francois Truffaut did for Close Encounters Of The Third Kind. But maybe that comparison isn’t fair to the science-fiction classic. Steven Spielberg and his cast did much more with less. Though I have to credit director Edwards—whose first feature Monsters was a dry run for this—for the many times he borrows/steals from the master for his monster movie. I saw shadows of Spielberg in everything from the camera dollying up into the awestruck faces of the cast, the immense scale supported by a great score—big ups to composer Alexandre Desplat—and a sweetness bordering on saccharine in some key moments. War of The Worlds and Jurassic Park were clear inspirations, and the CGI here is top notch.

Unfortunately, there are also times Godzilla is channeling one of Roland Emmerich’s other disaster-ous movies, such as 2012, where the humans are just there to be crushed, not actually manifest as people we care anything about. When you have the great David Strathairn in your movie and even he doesn’t elicit feeling, there’s a problem.

Once we get into the meat of the beast, and those creatures are allowed a little more screen time, everything improves. Happily, cities we don’t usually see destroyed in movies get what’s coming to them—so long Honolulu and Las Vegas, it’s been good knowing you. San Francisco is generally a bit more prone to disaster, especially the Golden Gate Bridge, which once again—see X-Men 3, Rise of the Planet of the Apes, Pacific Rim—will need some serious post-movie renos.

The final act, complete with a knock down-drag out monster three-way, is good fun. I noticed some obvious art direction inspiration from the video game Crysis 2, but I won’t hold that against the filmmakers. With the exception of the problems I noted above, I found Edwards a thoughtful creature feature creator. The film is full of children and animals and bugs—we all share this big old world, you know—and even the monsters give a cry of anguish when they lose a family member. The running theme that we’re all trying to protect and extend our families got through to me. Who are Godzilla’s family? All of us, I suppose. For a skyscraper-sized reptile, he’s strangely benevolent.

I also enjoyed the movie’s sly wit: Yes, I saw “Mothra” written on that glass case. It’s no accident the first time we see the monsters fight is on a TV monitor scrawled with text. I liked the little boy’s identifying the “dinosaurs.” And when the paratroopers drop out of the sky over San Francisco to the sound of the Monolith theme from 2001: A Space Odyssey, that’s a genuine cinematic thrill.

So, while not a masterpiece of the genre, it’s something fans of giant monster movies shouldn’t miss.