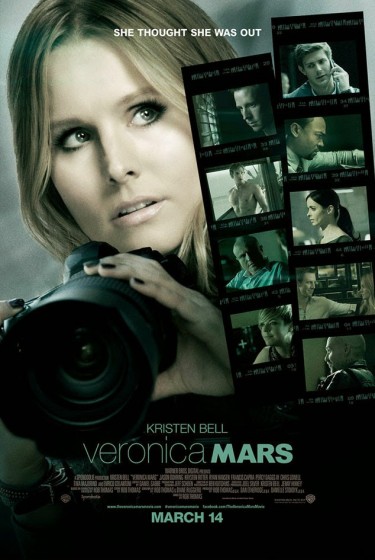 Directed by Rob Thomas
Written by Thomas and Dianne Ruggiero

By the will of Veronica Mars fans—”Marshmallows”—everywhere, we have a Veronica Mars movie. I love that crowdsourcing turned a low-rated but cult-beloved TV series that couldn’t stumble past three seasons into a full-fledged feature film. Well, let me tell you with not a little bit of sadness: this film isn’t actually entirely fledged.

I hope it pleases those who invested and wanted this to happen so bad, but for me—and I’d describe myself as quite fond of this plucky detective and her adventures, if not a card-carrying ‘Mallow—Veronica Mars is a disappointment. It lacks the scope of a cinematic translation while denying us the pleasure of another full season of Ms Mars and her hard-boiled mysteries. By falling somewhere in between, it feels like reheated leftovers—a taste, a tease. Not nearly a triumph.

The startlingly unchanged Kristen Bell returns as Mars—the former teen sleuth of Neptune, California, a town divided between the haves and the have-nots. She’s on the verge of becoming a New York lawyer. In the nine years since her high school grad she’s moved on: She’s in a healthy relationship with a nice guy, Piz (Chris Lowell, who looks like he should still be playing guys in high school), and the shame and degradation of Neptune is behind her. That is until that chump Logan Echolls (Jason Dohring), her bad-boy ex, gets in trouble again. It’s a murder rap, natch’, and he calls Veronica to help him find a decent lawyer to represent him. That’s a bit weak, but it’s enough to get her on the plane back home. Keith Mars (Enrico Colantoni), her redoubtable P.I. dad, is still doing what he does, still just on the wrong side of respectable. A lot of familiar faces pop up—a nice round of cameos from most of the key TV cast, with the notable exception of Duncan Kane, who weirdly doesn’t even get a mention, though his family does. Of course, no spoiler alert needed, Logan is innocent. Veronica just needs a little time to hang around town and figure out who’s guilty.

So far, so familiar. And that’s not all a bad thing: Thomas made a wonderful TV show, featuring a spectacular lead character exploring convoluted mysteries while uttering zippy, self-aware bon mots. The series was a delight because not only did you get a strong young woman at its centre—someone who’d been through serious trauma and yet was far from a victim—but she was constantly unravelling secrets close to her heart, with a barb in her tongue that never got twisted.

We get much of that here again. I found myself laughing at Veronica Mars. The “hellmouth” gag almost made me choke on my popcorn.

But what is problematic is none of this has been opened up for the movie. Thomas directs it exactly like he did the TV series almost a decade ago and as a result, it feels cloistered. Instead of providing a new beginning, much of the viewing pleasure comes from nostalgia. The scene pacing—typically brisk—hardly allows us any time to reacquaint ourselves with the sprawling cast. Beloved characters like Mac, Weevil, and Wallace get short shrifts. Even Daddy Mars doesn’t get much time to spend with his daughter before the plot kicks in and we’re running headlong into murder suspects, sex-tapes, and moronic pop-star fans.

All that would be fine if this was still the TV series, but the beats of a 147-minute feature film need to expand, to breathe, to fill the edges. It’s almost as if Thomas had planned out a full season of TV and crammed it into a single movie. As a result, everything feels rushed, and the pauses you’d get to soak in a sweet father/daughter/dog (where’s the reliable-but-intimidating hound, Backup?) pizza night at the episode’s end never quite materialize. Which seems a real shame. I say that even while readily admitting I was chuckling along to Veronica’s quips as she handily deconstructs the dirty town’s most recent murder.

And, can I just say one more thing? Veronica and Logan shouldn’t wind up together. Their romance never made sense when they were teens and I can’t see it now, any more than I can see him becoming a Navy pilot. Nor do I get why she’d entertain the thought of staying in this crappy town that never did anything for her. She’s better than Neptune, California, and she’s better than this extended episode masquerading as a movie.