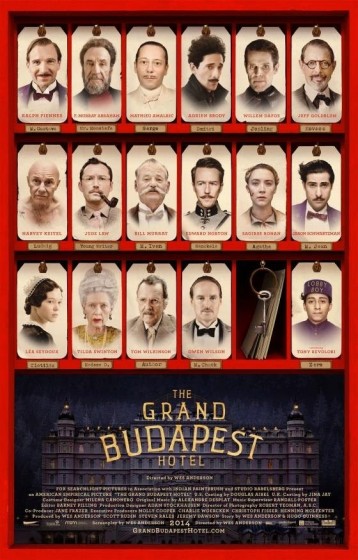 March 30, 2014 flawintheiris
Directed by Wes Anderson, Written by Anderson and Hugh Guinness, inspired by the writing of Stefan Zweig

A new Wes Anderson film is always an event. The Texas-born filmmaker may be too precious for some, but show me one of his peers with such a distinctive, irrepressible visual and thematic style, a sweet-sad combination of nostalgia and a hard-eyed truth about the loss of innocence.

What lifts The Grand Budapest Hotel to sit comfortably amongst his best—perhaps even above them—is the melancholy vein pulsing just beneath the immaculately composed visual skin, undercutting any accusation of prissiness. This is a grim, fascinating little comedy. Its darkness includes, but isn’t limited to, fingers brutally severed by a slammed door and a character’s head showing up in a basket.

The tale told in triple flashback: In the present a woman reads a book. In the recent past, the book’s author (Tom Wilkinson) remembers being a Young Writer (Jude Law), having spent a few days in the 60s in the decaying Grand Budapest, located in the fictional Eastern-European but very Germanic nation of Zubrowka—a country served by a broadsheet called the Trans-Alpine Yodel. There he met Zero Moustafa (F. Murray Abraham), the hotel’s eccentric owner, and at dinner, Mr Moustafa tells the tale of the former hotel concierge, Gustave H. (Ralph Fiennes), the ostensible hero of this story. That was back in 1932, when Moustafa was the Lobby Boy (Tony Revolori) and the hotel was still in its glory days, though the drums of fascism were booming even then.

This distance from the present, underlined, allows Anderson to tell a story as if from a dusty old picture book, a feeling of period and remove from realism where he’s typically comfortable. Even the ratio of the film is square up on the screen, taking away some of the cinematic framing we’re accustomed to.

Apparently shot entirely in Germany, the sets are glorious and delightfully inauthentic—not a far cry from the cutaway ship and underwater locations in The Life Aquatic With Steve Zissou, still my favourite of Anderson’s work. The hotel in the 1960s is wonderfully decayed, with scenes in its bathhouse and dining room. In the 1930s, it has a vibrancy that reminds me of Stanley Kubrick’s vision of The Overlook’s glory times in The Shining. And the exteriors are a hypnotic collection of European cobblestoned streets and quite obvious, but no less wonderful, miniatures.

Gustave is a nihilistic sensation seeker who “sleeps with all his friends,” especially if they’re older, blonder, women. But above all, he believes in respect and courtesy for people. That ideology, and the hotel, are his reasons for being. His sweet relationship with his Lobby Boy is the heart of the film, and their passion for the Grand Budapest is a shared religion.

Madame D. (Tilda Swinton in old-lady makeup) is one of the guests who enjoys his “exceptional service.” When she dies unexpectedly, Gustave is the prime suspect in her murder, especially after it’s revealed she willed to him “Boy With Apple”, a very valuable painting. Her adult children, including son Dimitri (Adrien Brody), are having absolutely none of that.

Also playing important roles in the story; Dimitri’s violent right-hand man (with four skull rings on each of his hands), Jopling (Willem Dafoe), the attorney, Kovacs (Jeff Goldblum), the baker, Agatha (Saoirse Ronan), a military police officer (Edward Norton), a butler, Serge X (Mathieu Amalric), a number of incarcerated men, including Ludwig (Harvey Keitel), and many, many more characters sporting delightful facial hair and costumes to expand the corners of this giftbox of a film with sweet, perfect cameos. (Yes, Andersonian favourites Bill Murray, Owen Wilson and Jason Schwartzman are among them.)

The headlong flight of the story is one of the elements that keeps it so charming. Once Moustafa’s and The Young Writer’s compounded tales get going, Gustave does a whole lot of running, from one smartly framed tableau to another, running from police, war, racism, psychopathy, and greed, but saved by camaraderie, friendship, a union of professionals, delicious pastries, and love.

I don’t want to say too much more about the plot. This is one you’ll just want to discover. Fiennes gives yet another perfectly realized performance in a career full of them, even though I occasionally felt he was channeling fellow Brit thesp Richard E. Grant at his most arch.

To conclude, a little hyperbole: The best movie of 2014 so far, it absolutely kills. The Grand Budapest Hotel is guaranteed to find a prominent place on my list at the year’s end. Anderson could keep making films for the rest of his life and fail to better this.

Of course, I hope he tries.