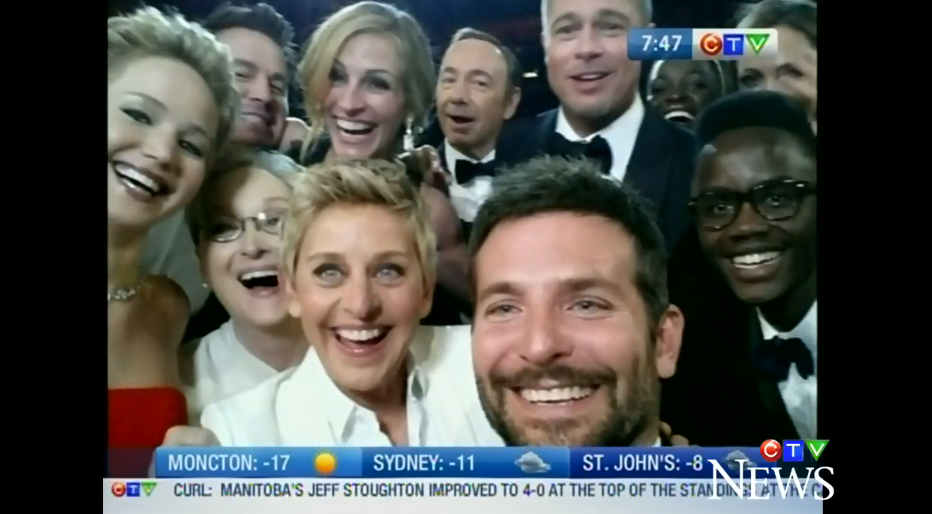 After sticking it out until the wee hours last night, I managed to get myself into the CTV Morning Live studio in Halifax early today to say some stuff about the Academy Awards. You can go here to see what few coherent thoughts I managed to muster about the big sheeeew.

If you want the Reader’s Digest edition, I’ll say this much: Even though there were so few surprises in any of the catregories—Gravity killed in the technical awards, as well as taking cinematography and direction, while 12 Years A Slave took Best Picture and Best Supporting Actress for Lupita Nyong’o—I really thought everyone was well-deserving. And maybe that makes for a less exciting awards ceremony, but props to Ellen DeGeneres for being her usual, laid-back professionally funny self, and making for a far less cringe-worthy experience than last year.

For me, her ordering pizza for the crowd was a great moment, as was taking Nyong’o’s lip gloss, and breaking Twitter with her hyper-shared selfie. During Pharrell’s performance, Meryl Streep’s shimmy was also a highlight. The speeches were excellent, and kudos to the producers for resisting having the orchestra play off too many of the awardees when their speeches rambled.

In fact, my biggest gripe of the night might have been the song from Frozen winning Best Original Song, when IMHO it wasn’t the best nor terribly original, in comparison to great numbers from U2 and Karen O. But such quibbles were small compared to celebrating the triumph of 12 Years A Slave, along with the richly deserved Best Original Screenplay award given to Spike Jonze for his wonderful film Her.

Go here for the entire list of winners. Congratulations to all.