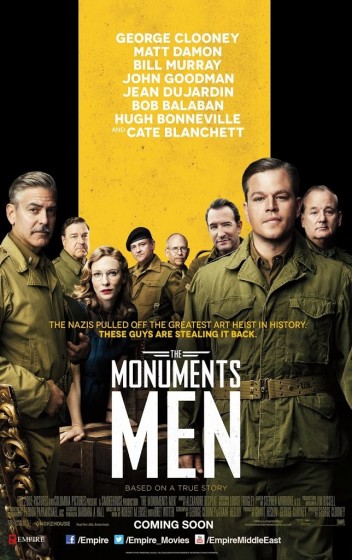 Written by Clooney and Grant Heslov, adapting a book by Robert M. Edsel
and Ben Witter

I get that George Clooney has a love for some old-timey movies, the sort that move at a more leisurely pace and rely a great deal on the charm of the actors. He showed that when he directed Leatherheads and Good Night, And Good Luck. I’ve got a lot of time for that kind of yarn. The intent is so good-natured, it feels churlish to criticize it too harshly.

That said, The Monuments Men isn’t great. It’s sweetly inoffensive and sporadically entertaining, but it isn’t great. Anytime a movie gets delayed two months from its scheduled release date, it doesn’t bode well. It doesn’t matter what the producers or studio says about it.

Aging intellectuals and art historians, this group of men showed up in Europe in late 1944 as the Nazis were on the run, trying to save as many of the region’s great works of art, paintings and sculptures, before the Germans could hide or destroy them. And I do believe they had an important job. But Clooney goes to such effort to hammer home the message that these guys were heroes in one too many voice-overs, it feels almost like he’s insecure about it. He protests too much. And his film fails to really make its case, scuppered by a rambling sweetness and lack of focus.

Clooney is Frank Stokes, who with his buddy James Grainger (Matt Damon, for the first time looking like a guy in his 40s), recruit the team of architects and art experts played by the dynamite cast of Bill Murray, Bob Balaban, John Goodman, Jean Dujardin, and Hugh Bonneville. These are a bunch of really watchable performers, and with a little more zip in the script, might have turned this caper into more of a heist-style movie (Oceans 11 in WWII?) or even an outright comedy. But Clooney seems to be going for more of the tone of The Great Escape—the least gritty kind of war tale. Heartwarming and wholesome. People may die, but not messily.

The first act is a real mess, to tell you the truth. A series of dull establishing scenes, with one following the other but feeling mostly disconnected, don’t do much to give you a sense of these people or what their personal reasons are for joining this brigade. A real lack of period authenticity in the dialogue and dialects makes for some awkwardness. Characters talk about “teenagers,” “getting screwed” and “grad school,” idioms that seem painfully out of step with the era they’re set in.

Murray and Balaban make a goofy double act and are the most fun to watch. At times I wished the movie was just about them. Cate Blanchett also appears as a brittle, pissed-off French art administrator accused of colluding with the Nazis. She and Damon have zero chemistry, though the picture really wishes they did.

By the end, the mission is accomplished with a surprising amount of ease. For art appreciators or fans of a certain breezy, star-driven entertainments, there are things to like here. Overall, though, The Monuments Men is no renaissance classic.