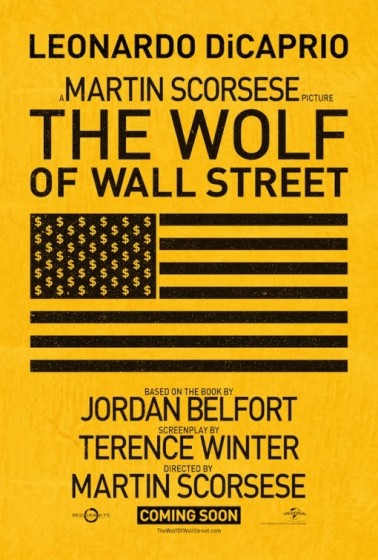 Directed by Martin Scorcese
Written by Terrence Winter, from the Jordan Belfort book

A wildly funny film, The Wolf Of Wall Street probably won’t be considered one of Scorcese’s great works for a couple of reasons. 1) It revels in excess at a time when that is particularly unfashionable, five years since those Wall Street denizens came out of the closet as evil, conniving scumbags.  Gordon Gekko showed that greed was good, but this is something else. The revelling is so blatant that it’s hard to even consider this a satire. It’s just too balls-to-the-wall fun. And 2), it’s just a little too light—there’s not a lot about Jordan Belfort to like, to empathize in, or finally, to learn from. This is a story of people—well, men mostly—who, when given the opportunity to earn extravagant riches and behave monstrously, they do without remorse or regret. Or, really, being punished in any serious way for it.

But given the solemnity of The Age of Innocence, or the epic, Americana-love of The Gangs of New York or The Aviator, I much prefer the edgy, adrenalized filmmaker who gave us crime thrillers like Cape Fear and The Departed, and the quirky, anxious pleasures of After Hours or The King of Comedy. That guy made The Wolf of Wall Street. And all we’re asked to do is sit back and enjoy the ride. It’s what I did and what I recommend.

Jordan Belfort (essayed by Leonardo DiCaprio in a great physical performance), is a young and hungry stock trader who is mentored in an all-to-brief cameo by Matthew McConaughey—recommending masturbation as a stress reliever. Things don’t work out really well at first for Jordan since his first day at work was October 19, 1987: Black Monday, the day of the stock market crash. But he’s soon back on his feet, starting his own company trading penny stocks. In a short time he grows his business into a real player on Wall Street, and it isn’t long before he’s finding ways to cheat the system, expanding his fortune exponentially, and a serious drug habit along with it.

You don’t need to understand all the financial bells and whistles to get TWOWS. Frankly, the movie doesn’t really care that much about that either. Belfort, in his frequent voice-overs and fourth-wall-breaking asides, cuts to chase: it’s about the pursuit of wealth and thrills. If you didn’t know what kinds of drugs were popular with young New York finance professionals before The Wolf of Wall Street, you will after you see it. You’ll also know about how prostitutes are rated (mostly by how expensive they are), the concerns around dwarf-tossing, exotic European sports cars, and Long Island real estate.

In some ways, The Wolf of Wall Street reminds me of a cross between the better parts of Baz Luhrmann’s The Great Gatsby and Oliver Stone’s Scarface, all on nitrous oxide. And if its frequent highs exhaust you during its considerable, three-hour running time, enjoy all the quality work from the supporting cast, including Rob Reiner, Jon Favreau, Kyle Chandler, Jean Dujardin, and especially the always-wonderful Joanna Lumley as the aunt of Jordan’s wife (Margot Robbie), who helps Jordan secure a Swiss bank account to hide his loot from the authorities. And big props to Jonah Hill, playing Jordan’s right hand man, Donnie Azoff, a guy with some especially dazzling dental work.

What I don’t get is the ‘moral outcry’ about this movie. While it’s not a satire, it doesn’t really work as a celebration either—the fall of of Jordan Belfort is well illustrated in the last act, and it is bleak, especially in his relationship with his wife and child. And I think if we live in an age just like Ancient Rome—all evidence asserts that presumption—and if our society can support this behaviour with impunity, we should be seeing these stories on our screens. I consider Spring Breakers and The Bling Ring in the same ballpark, speaking of other interesting 2013 releases with genuine cultural cache.

Despite (or maybe because of) the controversy, I predict The Wolf of Wall Street will find a serious fanbase among those who get a vicarious thrill from watching immature and silly people enjoy having all the money in the world but only a small share of the smarts.