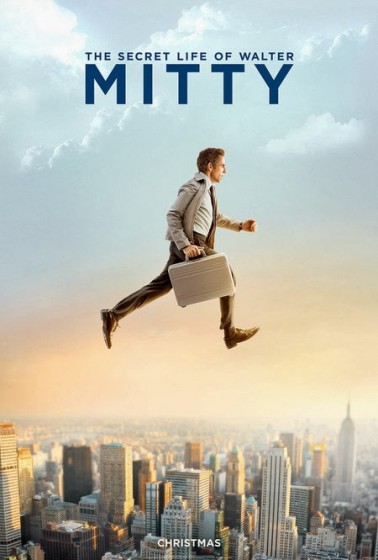 I was a little late to this Christmas season-release, so I’d read a few mixed reviews in advance. My expectations had been adjusted, accordingly, which I think was a good thing. I recognized the many places where it doesn’t work, while appreciating the few where it does.

I’ve never read that source material, but I know the 1947 Danny Kaye film a little, where meek and mild publishing assistant Mitty spends a big chunk of his time daydreaming of a more adventurous life as a World War II pilot, surgeon and sea captain, impressing Virginia Mayo in her various guises, until she shows up in his actual life, upending his staid existence.

Stiller’s Mitty works at Life Magazine in the photo lab. (In the real world, Life hasn’t published regularly since 2007—this material has been in development for awhile.) Mitty is awkward, a terminal daydreamer, but, in fact, not a hopeless case. He’s able to chat with the woman at work who he’s crushing on (Kristen Wiig, showing some range), and demonstrate his impressive skateboard skills to her son. Mitty’s mother (played by the still-delightful Shirley MacLaine) isn’t quite the hectoring crone she was in the ’47 picture, though his sister (Kathryn Hahn) is a bit of a kook who might take her more reliable brother a little for granted.

He’s also got a solid relationship with Sean (Sean Penn), star photographer and grizzled adventurer who’s such a legend with his camera he gets to decide which of his negatives becomes the Life cover shot. (Huh. I’ve never known a freelancer to have that kind of pull, but then I never worked at Life.) And when Sean’s choice for cover photo on the final edition of the mag is misplaced, Mitty takes it upon himself to find it,  even though the photo’s absence isn’t his fault at all. Turns out, Sean has left him a few clues in other negatives, and that’ll force Mitty to break out of his fantasy world and actually become the world-traveller and adventurer he always wanted to be.

That’s great and all, but hold up a second.

Is there a moment of catharsis for Mitty, where he finds his inspiration to finally change his life? Kind of… he’s gone to Greenland, trying to find Sean, who might be aboard a ship off the coast. A very drunk helicopter pilot has agreed to take Mitty out there. Mitty has a moment where he imagines Wiig singing “Space Oddity” to him, which gives him the courage to hop on the chopper with the guy who really shouldn’t be flying in that condition.

But after that, he’s just so damn cool, it’s like he was always this superhero underneath the awkward exterior. Are we supposed to assume that his fantasy life so prepared him for hiking the Himalayas or fighting sharks in the North Atlantic that none of it causes any angst or even wonder? At no time do we get the sense that he’s really reaching deep to find some well of courage, which makes his character arc kind of flatline. I started to suspect he was never awkward, just a great liar.

Also, watching the film, with Stiller’s face framed in so many shots, I started to consider how much of this was about the storyteller rather than the story. More than once the picture crosses a line into what I’d call blatant vanity. It’s like looking at a record by Sting and finding six or seven perfectly posed photos of the guy next to the liner notes. Provided the music is good, I can accept it. And when The Secret Life of Walter Mitty is engaging, I accept it too. When it isn’t, I think I’m watching a Ben Stiller-likes-to-travel-and-look-good-in-knitwear lifestyle ad.

But worse than this, The Secret Life of Walter Mitty suffers from some of the most egregious product placement I’ve seen in years. McDonalds, eHarmony, and especially Papa John’s pizzeria are painfully and obviously shoehorned into the script. And I’m willing to bet you big money there’s no Papa John’s franchise is rural Iceland.

So, that’s the debit column. In Mitty’s favour, I would say as a director, Stiller has put together a visually arresting film. The production design is clean and clever, utilizing text and imagery to evoke a moving edition of Life Magazine. And the international cinematography is gorgeous. I would say that the film is most successful as a whimsical travelogue, and worth seeing on a big screen for DP Stuart Dryburgh’s compositions.

Too bad it doesn’t quite land so solidly or consistently in its other ambitions.