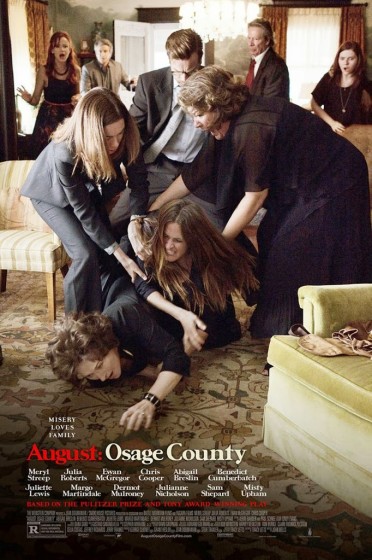 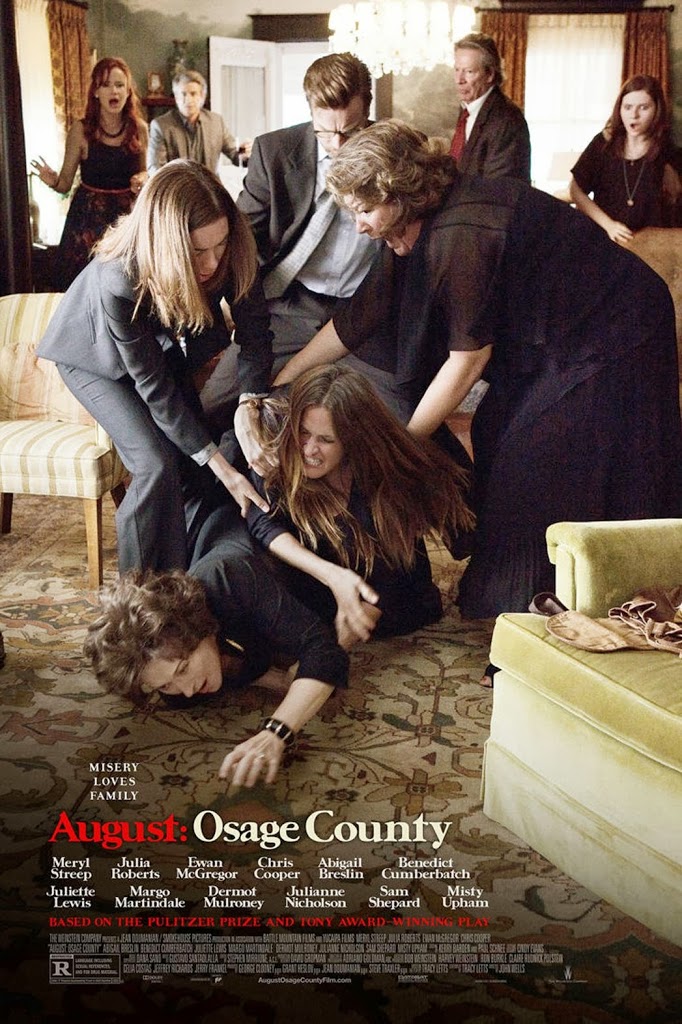 Since Julia Roberts had kids, she’s been much more choosy with the films she does, working much less frequently. This is the opportunity afforded a former Queen of Hollywood, and more power to her. I’ve noticed that when she does work, the quality of her performances hasn’t diminished. If anything, she’s gotten better and stronger.

Which made me think of Jennifer Lawrence, who is the best part of American Hustle. Like Roberts, she is nominated for Best Supporting Actress at this year’s Academy Awards—they were announced yesterday. Lawrence is where Roberts was back in 1993, in terms of the stardom and attention. And I think Lawrence is brilliant, and unlike the younger Roberts she’s being smarter with her choices for film roles.

But in this race, Roberts has the advantage of experience. It’s Roberts who deserves the statuette this year: she has never been this good. She’s the best reason to go see August: Osage County.

Fortunately, she’s not the only one. This is a drawn out, occasionally melodramatic, gorgeously acted, family drama. The worst thing I can say about it is it never quite escapes its stage-bound roots of people talking, often yelling, in rooms. If you can accept that, there’s no reason to stay away.

Roberts is Barbara, the eldest of three Weston girls, along with Ivy (Julianne Nicholson, stellar), reliable and quiet, biding her time, and Karen (Juliette Lewis), prone to bad decisions when it comes to men, like her current beau, Ferrari-driving Steve (Dermot Mulroney). Barbara is separated from her husband, Bill (Ewan McGregor, who really needs to work on that mid-Atlantic drawl he’s got in some movies), and struggles some with her emo daughter, Jean (Abigail Breslin). Barbara and her sisters grew up with Violet (Meryl Streep) and Beverly (Sam Shepard) as parents, and pity them for it. Violet is addicted to painkillers. She’s dramatic and mean, and for once, Streep overplays her role. I can see the temptation to go big, and it’s earned her an Oscar nod, so what do I know? But she’s showy without restraint once or twice too often here. Shepard is barely in it. His Beverly, a poet and lifelong alcoholic, drowns himself early on, and that’s why the family gathers, for the funeral.

Joining them are Violet’s sister Mattie Fae (Margo Martindale) and brother-in-law, Charlie (Chris Cooper), and their awkward, damaged son Little Charlie (Benedict Cumberbatch, startling in how he can dial down his charisma). Watching over them all is Johnna (Misty Upham), a Native American housekeeper/caregiver who sees all the shit going on in the family, only interceding when it becomes really necessary.

I was prepared to resist the film based on that stageyness I mentioned earlier. That was until I sat through the central set-piece, a dinner scene that must have taken weeks to shoot, the moment where, after Beverly’s funeral, the family bears the full brunt of Violet’s anger, frustration and fear. She knows all her children’s secrets, and how to hurt them. It’s a bravura moment for Streep, but everyone around her shines. All the actors have their moments, and they’re all up to the challenge of the script. I sometimes wished Wells brought a bit more dynamism to the direction, but with this cast I can understand the instinct to lock down the cameras and just let them do their thing.

And while the dinner scene is the highlight, Roberts, Nicholson and Streep have a later moment at the dining room table over catfish that is both brutal and, ultimately, hilarious.

I wanted to mention Lewis again, too. I often forget what a presence she has onscreen, and it was great to see her in this.

But to bring it back to Roberts; she’s the film’s spine. Her simmering, seething Barbara is something to behold. She’s put up with the most from her mother, and when she decides to take control of the situation, it leads all the characters around her to truths they’d rather not face. That’s when she realizes the legacy of Violet, the ways in which she can’t escape being just like her.