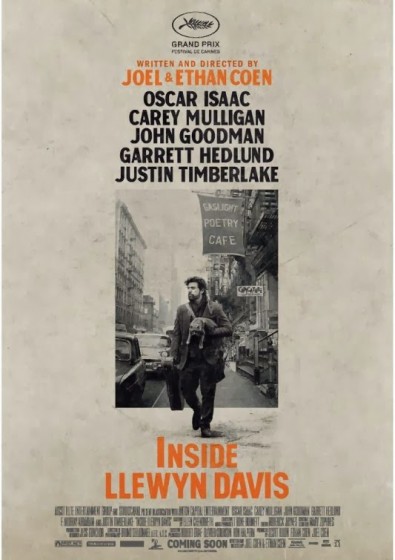 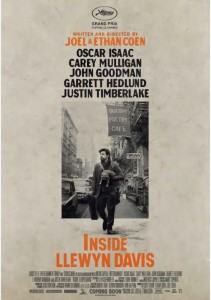 Written and directed by Joel and Ethan Coen

I love the Coens. They’ve carved out for themselves a wonderful, peculiar corner of Americana. No matter the subject, their films exhibit an intellectual, anarchic wit that’s all their own. Only a handful of their peers, US filmmakers and writers—maybe Paul Thomas Anderson, Wes Anderson, Nicole Holofcener, Charlie Kaufman—come anywhere close to the distinct voice the Coens have been delivering on a regular basis since 1984.

With Inside Llewyn Davis, they’ve done it again. They dive into a recognizable cultural milieu and era—the Greenwich Village folk scene in the early 70s—just as they did with O Brother, Where Art Thou? and Barton Fink. They serve up a slightly misanthropic hero—like Fink again, with touches of The Big Lebowski‘s absurdity—on a journey that keeps him butting heads with the people around him, some of whom are only trying to help.

A low-rung folk singer with some serious talent, Llewyn (the wonderful Oscar Isaac, who I remember most clearly as Standard in Drive) believes in artistic integrity: it’s his credo and faith. But it’s not making him much of a living. As we spend the better part of a week with him, couch-hopping around New York and further afield, visiting with the few people who he hasn’t alienated, we see in very fine strokes the sacrifices he has to make in order to be true to his music. And we get to laugh about it. Sometimes in a slightly hollow way.

This is definitely a comedy, though a dark one. It’s rare that a Coen Brothers’ film, whatever the genre, isn’t infused with melancholy, and this has plenty. Llewyn (whose spirit is borrowed from folk singer Dave van Ronk) spends his time trying to make a little money, either borrowing it from his sister or friends, while playing gigs. He’s been sleeping with Jean (Carey Mulligan), a singer in the Peter, Paul & Mary mode, who’s married to Jim (Justin Timberlake, unusually but appropriately stiff), a guy who’s her partner in music, too. She’s pregnant, and blames Llewyn entirely for her situation.

And Llewyn, who accidentally becomes the protector of an orange cat, also needs to find his way to Chicago where a music bigwig (F. Murray Abraham, who doesn’t look like he’s aged a day since Amadeus) might be his chance for a break in the business. He gets there with the help of a dude named Al Cody (the increasingly busy Lena Dunham discovery Adam Driver), and for a stretch the movie becomes as much a literal journey as a figurative one. Coens’ regular John Goodman makes his mark as a blowhard jazz musician.

This is a story that doesn’t go where you expect it to, that dangles bizarre moments, characters and conversations through its running time. Llewyn may not be terribly likable, but he’s true to his passion and his work, and that keeps us interested, along with those moments of humour and surprise. The music, of course, is lovely, and sometimes silly. That’s not to say the Greenwich Village folk scene isn’t more or less reverentially recreated, but the Coens leave space to inject an occasional jab at its twee preciousness.

Inside Llewyn Davis is a joy, and one of the year’s best.