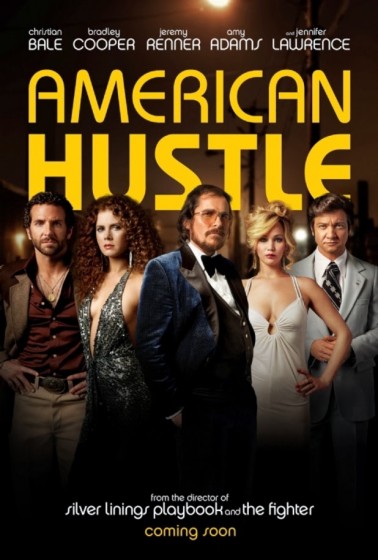 Russell likes to tell his stories on an edge. That’s what I like about him and his movies. It feels like his tales could fly apart at any minute, become total, unwatchable messes, but he always manages to keep it together just this side of confusion. This is certainly true of Flirting With Disaster and Three Kings. I Heart Huckabees was awful, I thought, but in the more mainstream The Fighter and Silver Linings Playbook he danced along that edge to great effect, telling two blue-collar American tales that never felt less than authentic.

In American Hustle, Russell steps back to the 1970s, and takes a page from Scorcese in his celebration of skeevy criminals, wide lapels and songs of the era to stitch it all together. And while I really like the effort to tell a story with flair, my feeling is that, this time out, Russell has made a movie that doesn’t quite work.

And a lot of the reason for that needs to be laid at the feet of Christian Bale, the Method king. His Irving Rosenfeld is an overweight New Jersey con artist afflicted by a bad comb-over, with a loose-cannon wife (Jennifer Lawrence) and son back home, but a mistress/business partner, Sydney Prosser (Amy Adams), in the office. Irv and Sydney make a living swindling desperate people looking for a loan. Though they’re strictly small-time, they keep it going under the radar until the FBI catch up with them. Agent Richie DiMaso (Bradley Cooper in awful, tight curls) is an ambitious, obnoxious dude looking to bring down politicians and crime lords, but he doesn’t have a clue. He uses Irv and Sydney to get to these power-brokers, including Mayor of Camden, NJ, Carmine Polito (Jeremy Renner). But Irv doesn’t like Richie, he doesn’t like that Sydney likes Richie, and he doesn’t like mixing it up with big-time, organized crime.

And, me, I didn’t like Irv, and I don’t think Bale does a good job with him. He’s a mass of method tics, a brown leather jacket, wig and 40 extra lbs. masquerading as a performance. I never bought him as a con artist. He has no confidence! His Irv is so conflicted all the time, so transparently so, how does he ever succeed in fooling anyone? If this was a broad comedy—imagine Will Ferrell as Irving—it might have worked. But trying to pull off a Scorcese-esque crime picture—with lighter, less bloody beats, mind you—he misses the required realism, the dedication to logic. This is especially obvious when he imports a Scorcese regular for a cameo and that guy’s dangerous intensity reminds us of the fluffy concoction we’re witness to. We need to be able to understand how this world works, and if Irv and Sydney don’t convince the audience as con artists, how can they convince anyone else on screen?

Amy Adams also feels miscast here. Don’t get me wrong, I buy her as sexy and manipulative, but I think just as Bale is outshone by his wardrobe, Adams’ chest-revealing blouses and high-cut skirts distract from her character rather than add to it. And are we supposed to assume that her terrible British accent—put on when she needs to play the part of banker-connected Edith from England—is so bad because the people she needs to fool are so stupid? Here’s where the breadth of the comedy is uncertain. I buy her insecurity around Irv and whether he’s ever going to leave his wife, but I doubt her gift with the grift.

The good news is, as usual, any movie that features Jennifer Lawrence has at least one part that’s going to work. She lights up every scene she’s in, to the point where she’s missed when she’s gone too long from the action. Her Rosalyn is such a delight, I wished the movie was just about how she spends her days in that big suburban home, singing along to “Live And Let Die.”

Cooper commits satisfyingly, too. His scenes with his boss (a game Louis CK) are highlights. And Renner is also dynamite, though his laser-like focus makes Bale’s rambling, fidgety performance feel even less real. I never understood why Renner’s Carmine likes Irv at all. Just because they both come from the streets? It doesn’t make a lot of sense.

Late in the running, when we finally see these professional liars put together a genuine hustle, it’s so transparent I wasn’t fooled for a minute. The Sting this is not.

I wanted to like American Hustle more than I did, given the talent involved. I admire Russell’s ambition with this material. But anyone who likes to walk on the edge is going to fall down once in awhile, and that’s exactly what’s happened here. American Hustle flies apart and never quite gets it together.