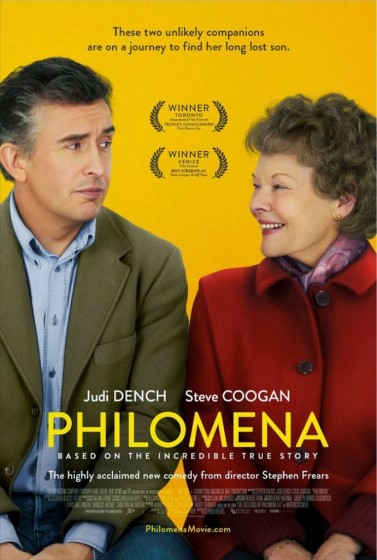 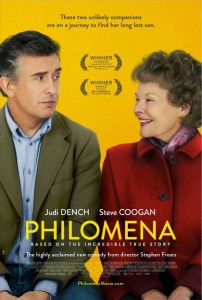 Directed by Stephen Frears
Written by Steve Coogan and Jeff Pope, based on a book by Martin Sixsmith

When Philomena Lee (Judi Dench) was a teenager (Sophie Kennedy Clark) in Ireland, she got pregnant. For her sins, the nuns at the Roscrea convent made her work in the laundries, seven days a week for four years, and forced her to put her son up for adoption. The nuns sold him to an American family.

This isn’t a film with a high opinion of the church, folks. Given the story, that’s understandable.

Fifty years later, Lee wants to find him. Her daughter, Jane (Anna Maxwell Martin), meets former journalist, recently sacked government advisor Martin Sixsmith (Coogan) while she’s catering a party in London. Jane convinces him to meet her mother and help her find her son. Though he’s skeptical of doing a “human interest” story, he tries to help this slightly batty Irish lady. And when he and Philomena follow the trail to the US, they discover her son grew up to be a big wheel with the Reagan-era Republican Party.

The delight in this tale is how the reveals all come in slow and steady, nicely balancing notes of sweetness and warmth with the real-life disappointments while still maintaining a positive tone. Dench and Coogan play a great odd couple, her peculiar points-of-view and faith in her god never wavering as his cynicism froths to the surface in response. What’s great is that even as she comes from a judgmental and rigid tradition, she’s refreshingly tolerant.

It would be hard to overstate Dench’s charm in a role like this. Her star power is undimmed at age 78, and Coogan, who wears three hats as producer, co-scripter and star, channels his typical brittle and uncomfortable manner into a character we can’t help but like as he represents our sense of justice when Lee would rather forgive all the wrongs done to her.

And, as usual, the wonderful Stephen Frears gets out of the way, directorially speaking, his typically unfussy style allowing his stars and the facts of the story to prevail. There’s a lot of ways this material could be mawkish and sentimental, but he avoids those pitfalls to deliver a fine, touching story.