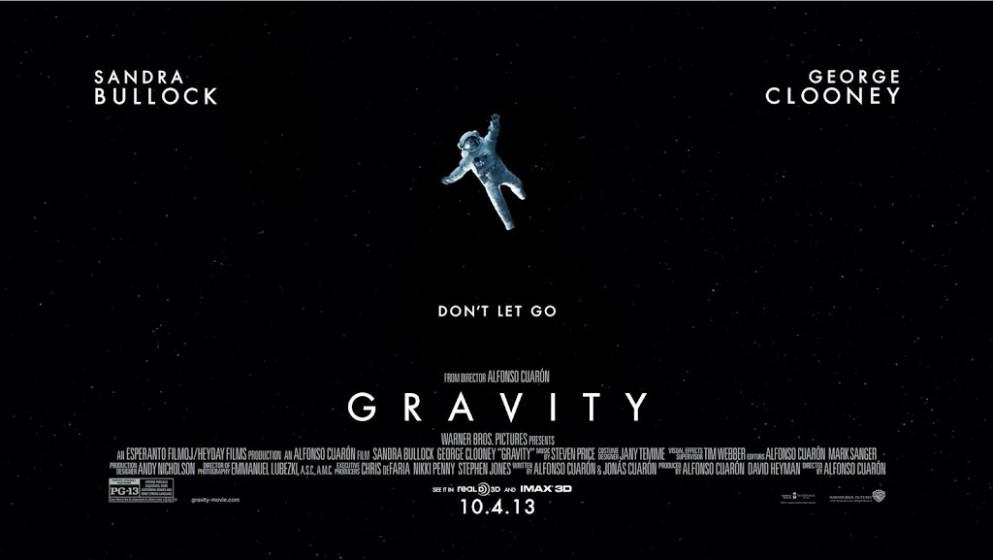 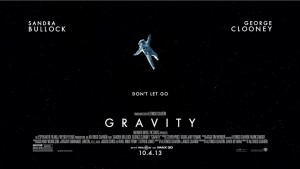 Directed by Alfonso Cuarón
Written by Cuarón and Jonás Cuarón

The first thing I thought of after seeing Gravity: “I wonder what Chris Hadfield would make of this movie?”

Now, I’ve gone on record saying I’m not being the biggest fan of computer generated imagery. In fantasy and action movies too often it reads as substandard animation, taking away the physicality of the experience. But when it’s used flawlessly, when it becomes a believable substitute for reality, it forces me to reevaluate my stance: I can’t really blame on the tech, but rather the lack of imagination or creativity with which it’s utilized in your average Hollywood movie, which this clearly is not. And Curaón has said 90 percent of what we’re seeing onscreen is CGI. I saw it in a regular old 3D, but I’m going to make a point of seeing it in IMAX. Gravity deserves it. Technically, Cuarón’s Gravity is up there with James Cameron’s Avatar for sheer visual achievement.

Despite what you may have heard, this is not a science fiction movie. Yes, it’s set in space, and there are a couple of subtle nods to iconic scifi pictures such as 2001: A Space Odyssey and Alien, but this happens in the present day, in plausible reality. The kind of film Gravity has most in common with is a human-versus-the-elements picture, like Alive, Touching The Void or 127 Hours. And, speaking of Cameron, parts of The Abyss. This big difference being where the characters find themselves.

In an astonishing opening shot—if it cuts at all in the first 15 minutes, I couldn’t tell—Matt Kowalski (George Clooney) and Ryan Stone (Sandra Bullock) are astronauts in orbit high above earth, fixing the Hubble Telescope from their space shuttle. Not far off is the International Space Station, and beyond that, a Chinese station. (Space is like a series of floating, cramped workspaces these days.) Kowalski’s the guy in charge, while Stone’s a medical engineer with not a lot of zero-grav experience. An accident forces Kowalski and Stone to improvise, making their way across to the ISS. From there, things get more and more breathless—sometimes literally—as these people must navigate in the deadliest, life-averse environment imaginable.

All the while we’re drifting with them. At one point we’re high over the Nile delta, then we’re in Stone’s helmet with her, seeing the fear in her face. Then we have her POV through the tempered glass of her helmet, before we slip out over her shoulder as she tethers herself to a bulkhead, with deadly shrapnel, the remains of destroyed satellites, travelling at bullet-speed around her. It’s gorgeous, hypnotic filmmaking; the weightlessness of both the astronauts and the camera makes everything that happens feel both dreamlike and terrifyingly immediate. This is what makes it special: Cuarón’s ability to grab us by our earlobes to bring us into the film.

Along the way we learn a few personal things about Stone—that she had a daughter who died in a schoolyard accident, and the spiritual and humanist drama of such a thing are played up with some unfortunately obvious dialogue while Stone’s life is on the line. These plot details feel to me like superfluous dressing, exposition-laden backstory to give the character supposed depth. I didn’t think we needed it. In a matter of moments, anyone watching will get the incredible jeopardy of what they’re facing—a million ways to die up there, with no breathable air, massive changes in temperature, and no way to get home. We don’t need to know anything about these people beyond what we learn by watching what they do. In fact, I’d say, the less the better.

Still, in the lean 90-minute running time—which feels a little like its happening in real time—there’s not much narrative fluff. You’re too busy taking in the scale of the thing. It’s like your eyes and brain are so full, the those little things, words and story, just slip on by.

Curarón, who has already shown a master’s touch in films such as Y Tu Mamá También, Children of Men, and Harry Potter and the Prisoner of Azkaban, has here delivered event cinema. It’s unlike anything you’ll see this year. No doubt the film will receive a deluge of awards, for both the mechanics of it and for Bullock—she’s never been better.