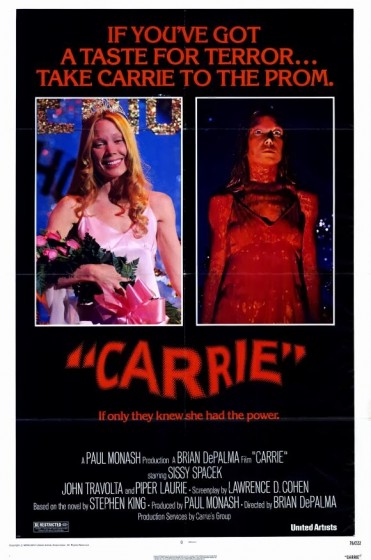 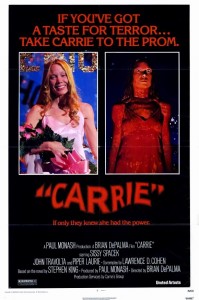 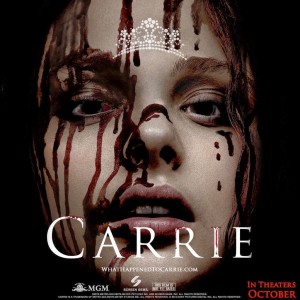 I went through my Stephen King phase as a teenager, reading most of his early novels and short stories. I wish I better remembered Carrie, the novel. But preparing for Kimberly Pierce’s film version, I did go back to watch the first cinematic take on the book for the sake of comparison. The DePalma version is considered something of a horror classic—remaking it is a serious challenge for any filmmaker—but with teen bullying such a hot-button issue these days, the timing for updating it now feels right. And also given Pierce’s directorial history—she made Boys Don’t Cry—on paper she seems like a good choice for the material.

(Incidentally, as I’m directly comparing the two movies, this is going to be a pretty spoiler-heavy review. Consider yourself warned.)

So, what of the material? Carrie White is a 16-year-old American suburban girl who is traumatized when she menstruates for the first time while in the school showers. It doesn’t help that her unsympathetic classmates pelt her with feminine products. Since Carrie’s mom is a bible-thumping, God-fearing type who avoids icky subjects with her daughter, Carrie never knew about periods. One of Carrie’s crueler classmates, Chris, resists the punishment for her bad behaviour in the showers and gets suspended, so she can’t go to prom. With the help of her boyfriend, Chris hatches a nasty plan of revenge on Carrie: to dump a bucket of pigs blood on her head during prom. And Carrie is going to that big event, much to chagrin of her mother. That’s because one of Carrie’s slightly kinder classmates, Sue, wants to make up for her part of the scene in the showers—she insists her boyfriend, Tommy, take Carrie to the prom. What nobody knows is that Carrie is rocking some serious telekinetic mojo. Lots of people are going to die.

I can report the remake is very faithful to the DePalma original in most of the ways that matter, which makes me wonder why they bothered. This is connect-the-dots filmmaking, for the most part.

There are a few obvious changes: it’s hard to imagine a mainstream movie today starting the way DePalma’s film did back in ’76. The shower scene in the earlier movie includes full-frontal nudity of the “high school” girls—Sissy Spacek, playing Carrie, was actually 26 at the time—complete with close-ups of soapy breasts. It’s so blatantly male-gaze exploitation, it sets up the entire lurid spectacle of the thing—you know it’ll be gaudy and outrageous and OTT, with DePalma’s overt Hitchcock touches thrown in.

It’s also pretty effective for this material—we’ve become duller, safer and more prudish in the years since. Maybe more tasteful, but it’s hard to argue this story is improved by any measure of reticence. Some might say I’m arguing for soapy breasts. Not necessarily, but I am arguing for pushing the envelope, which Pierce’s film does hardly at all.

Starting with a new, unnecessary scene going back to Carrie’s home birth, the new version is not very gory, which feels like a mistake already. That’s not to say that Julianne Moore, playing Carrie’s mother, doesn’t bring the crazy. She’s compellingly wacko in a way that matches, if not surpasses, what Piper Laurie did in the ’76 version.

Chloë Grace Moretz as the new Carrie is obviously a more plausible teenager (she actually is 16), though plays her as shy and introverted rather than just sheltered. Maybe that’s a smart call. Spacek’s Carrie almost felt like she was Amish or something, totally culturally separate from her badass classmates, but still socially capable. And technology plays a role in the new version, though not as much as I’d expected. When Chris posts a video online of Carrie’s shower-scene humiliation, it comes back to haunt her.

Great to see perennial asshole Hart Bochner show up as Chris’ father. And Judy Greer is good as the PE teacher, as good as Betty Buckley was in the original.

Beyond a disappointing restraint, a few other things work to undermine the new version.

First off, I found Carrie’s nemesis, Chris, much meaner and much more compelling played by Nancy Allen back in ’76 than this time by Portia Doubleday. Back then her boyfriend was John Travolta, totally goofy, while she was a sexually manipulative, narcissistic psychopath. The film accorded her with much more agency, while her modern counterpart is bossed around by her tough-guy beau.

Secondly, in the early version, Carrie’s powers are much more random, much more the product of pure rage and frustration, kind of an elemental unleashing that she can barely control. I think it makes her more sympathetic, and her rampage more satisfying. In the new take, Carrie becomes a more demonic force, calculated and thoughtful in how she uses her powers. To me that felt like her mother’s vision of her as a hellspawn was accurate, and I didn’t like the idea of her mother being so right, nor the Old Testament overtones of that rightness.

Finally, in the new version there’s a pregnancy subplot with one of the characters that makes no sense at all, and the ending feels like a b-movie joke.

Overall, Pierce’s film feels like a missed opportunity—it could have gone for a deeper realism of teen cruelty and bullying, or for a gothic, supernatural darkness. It could have been much more frightening, bloody, and horrible. Instead it just feels kind of rote. Maybe only appreciated by people with no familiarity with the original movie, of which I’m not one.