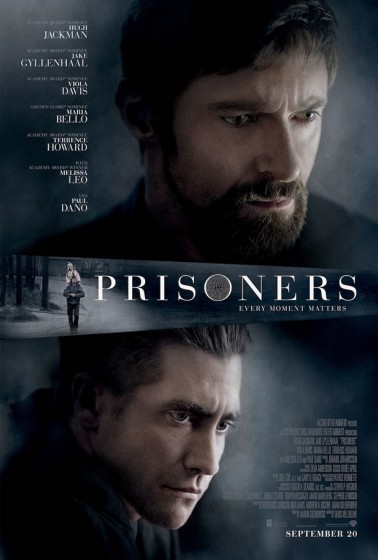 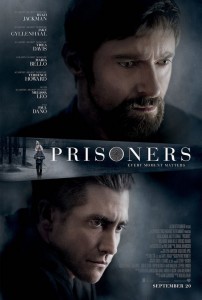 Well, last night I made a showtime call to see Prisoners, rather than Blue Is the Warmest Colour (La Vie D’Adele) or A Field In England. Even though I know it’s opening later this week, I went with my filmgoing heart in the moment. And it wasn’t long before I had filmgoing remorse.

Quebec director Denis Villeneuve (of Polytechnique and the Academy Award-nominated Incendies) was a big part of the draw. He couldn’t be at the screening, but sent a brief video wishing us “Bonne Cinema.” I was excited: Canadian director making his first English-language Hollywood picture, and it’s a crime drama, a favourite genre of mine. What would he do to bring fresh life to it? Well, it’s too well-made to entirely dismiss, but problems with the script and casting makes for an often ridiculous movie that plays off suburban paranoia of “otherness” in a way that feels cheap and exploitative because it doesn’t allow for the themes to resolve. There’s some nice handling of suspense here, but not much else I can recommend.

Two families live in a wooded, rainy subdivision and get together at American Thanksgiving, Franklin and Nancy Birch (Terrence Howard and Viola Davis) and Grace and Keller Dover (Maria Bello and Hugh Jackman). Both couples have two teen children and one little girl each. When the girls go missing after Thanksgiving dinner, all signs point to Alex Jones (Paul Dano), a guy with “the mentality of a 10-year-old” who lives with his sullen aunt (Melissa Leo) and drives around in a camper van.

The kids’ disappearance wreaks havoc with the two couples’ lives, as you can imagine, and gives the four performers playing parents a chance to stretch their acting muscles. Jackman is convincing as a high-strung survivalist, and Bello, who has never had trouble communicating darker emotions in movies like A History of Violence, is also quite good. Howard and Davis are also solid, but the script doesn’t really know what to do with them, aside from have them cry and give the other couple someone to commiserate with.

Keller Dover is a god-fearing sort, a message we get through his repeated reciting of the Lord’s Prayer. But it’s a just tick, because the movie doesn’t provide any real exploration of his faith or the impact of circumstances on that faith. It certainly doesn’t stop him from doing some pretty awful things in service of his daughter’s potential rescue, and we never find out if his actions have any lasting impact on him or the people around him.

I’ll credit the film for some lovely camera work and a good score,  both providing a palpable sense of dread. But the film’s weakest link is the character of the detective on the case: Jake Gyllenhaal—who’s been great in other things—is a poor choice to play a tough-as-nails cop Loki, with slicked-back hair, a Mason’s ring and neck tattoo, a guy who has “cracked every case he’s worked on.” Please. He doesn’t  convince as this incisive investigator nor does he intimidate anyone. Jackman’s size and rage is so palpable in their scenes together, Gyllenhaal looks like a little kid next to him.

And the script does him no favours. The set-up is strong, but when Loki spots a potential suspect just because he looks suspicious at a vigil, Prisoners really starts to unravel. That kind of coincidence doesn’t work, because even when it happens in real life, you never quite believe it. It’s like when Loki finds a body in a basement almost accidentally, and then that doesn’t show up in the papers when everything else that takes place in the story does. It’s a big hole. Later, when another character turns out to be the big bad, I was so annoyed by the red herrings, it was hard to care. Top that off with the line that never should be spoken in movies ever, sincerely or ironically; “He’s a good man.”

That was the end of my rope with Prisoners. It wants to be Silence of the Lambs, or even Mystic River, but has none of those films’ moral insight or sophistication. It asks questions through its characters, but neglects follow-through or any real discussion, settling for just the action notes. What it ends up being is a more dour version of Taken. And I didn’t mind the Parental Revenge of Liam Neeson, but at least Taken wasn’t pretending to be anything more than it was. 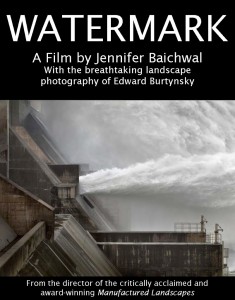 Watermark director Jennifer Baichwal was present at her 10:15pm screening, and talked about how she and Edward Burtynsky—photographer and subject on Manufactured Landscapes, here elevated to co-director—didn’t want to do something comprehensive, feeling that was impossible on the enormous subject of our relationship with water. Well, after seeing the doc, it feels like she’s selling herself and her collaborator short. This is an expansive look at the world and how water is used by people, how inseparable and essential it is to human beings and the planet. As with Manufactured Landscapes, the film’s accent is on the sublime, rather than the political, something the previous documentary was criticized for. I like it, as I liked the former film. It shows the grandeur of we industrial humans can create, as well as the cost to our world, without judgement. And the credit of Burtynsky as director means he’s folded into the process more directly. The film becomes as much a work of art unto itself, a moving version of his photos, as an investigation. Probably more so. And this time, the energy of the picture is more dynamic; They visit and capture scenes from more parts of the planet—a dam built in China, glaciers melting in British Columbia, ice measured in Greenland, hot springs in Iceland, leather tanned in Bangladesh, thousands of miles of aquifers in Texas, 30 million pilgrims bathing in the Ganges, a crusty riverbed in Mexico, and more. I was moved, awed, and calmed as I travelled through the camera’s eye.