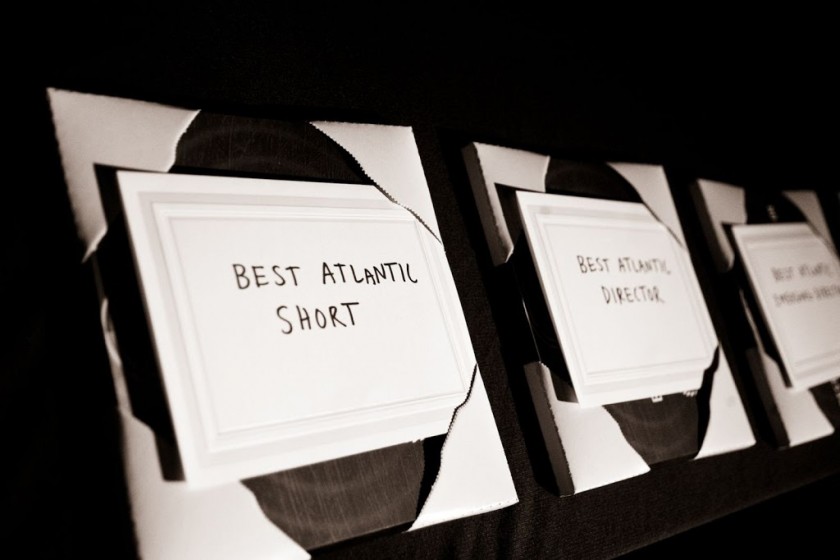 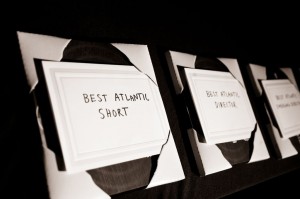 First off, I just wanted to mention the first battery of awards that have been given out at the 33rd edition of the Atlantic Film Festival. More will be coming at the conclusion of the AFF on Thursday, but here’s a bunch to start. Congratulations to all!

The Atlantic Shorts 7 program from Monday is a nice cross-section of largely successful short films from the region. Here’s what I saw:

The Passenger by Jacqueline Hines
The plot was a bit murky, but this tale of a connection between two women and a stack of boxes was moodily acted, shot and scored, providing a grim vision of urban decay.

Walls by Walter Forsyth
Loved the words spoken by youth worker and poet Ardyth Whynacht about prison and society, and enjoyed her rage at computer hardware—taking an axe and power tools to screens and gadgets.

Julie au Bois by Julien Cadieux
A gorgeous look at nighttime Quebec City, the story of an 18-year-old New Brunswicker’s nightclub adventure is both bleak and beautiful. It’s a compelling look at a rite of passage.

Green by Heather Young
A teenager snoops on her absent mom’s romantic life, with not entirely unexpected consequences.

Spin the Barrel by Megan Wennberg
This is a terrifyingly effective film, about a group of kids, led by a troubled (and quite hilariously sunburned) teenager, who get ahold of a revolver with a blank shell. It’s hard not to expect the worst.

There’s Been A Terrible Mistake by Jasmine Oore
I will recuse myself from critical comment, since Jasmine is a dear friend and I had a small part in helping her make this film. But I’ll just say this: I think she’s well deserving of the award she received on Sunday (please see above) and her film is a moving, and frequently hilarious, clinic on surviving grief.

On the subject of awards, I’ve noticed there’s been no balloting for the People’s Choice Award. In years past there were the little ballots you’d fill out and deposit in buckets at the end of screenings, resulting in a People’s Choice winner at the festival’s end. That isn’t happening this year, which is too bad because it’s fun for people to rally behind their favourite films at the fest and, even if yours didn’t win, hear about a movie that really moved people. It’s community-building. However, we can expect a couple of new awards, the Joan Orenstein Award for Outstanding Performance by an Actress and the David Renton Award for Outstanding Performance by an Actor.

Another AFF-related observation: restricting all the movies to Park Lane has made it busier than ever. Or maybe it’s just that the programming for #AFF2013 is really grabbing people this year, resulting in a higher turn-out. If so, awesome. But whatever it is, I can’t remember the Empire Theatres at Park Lane ever being as crowded as it has been in the past few days. Almost every movie I’ve seen has required standing in long, snaky lines of people filing into packed screening rooms. And, in all that time, I’ve found the small army of volunteers to be organized, gracious and helpful. Good work, you guys. And kudos to all the organizers of the festival, for continuing to make all of this such a fun part of the year for us film fanatics.

Now, here’s one small disappointment for those of us who have full time 9-5 jobs (yes, that’s me, too): the programming of so many films during the weekday. That’s new this year, too. While I can easily understand why it’s happening—only so many hours in the day and only so many available screens —it means two or three films high on my list of AFF must-sees will slip away because I can’t be there to see them. I’ll keep my fingers crossed for more screens available next year—perhaps a return to the Oxford?

Speaking of not seeing stuff, a weather-related headache kept me away from Cas & Dylan on Monday night, but the response I’ve been hearing about Jason Priestley’s feature has been very positive. Not as much for Don Jon, but it opens next week, so you can go see it yourself then. That’s my plan.

Tonight I’m facing the biggest conflict of the festival: Prisoners, La Vie D’Adele (Blue Is the Warmest Colour), A Field In England and Watermark, all are screening tonight, all I’d like to see, and many overlapping. I know at least a couple are opening in cinemas soon, so while that might be a mark against seeing them now, seeing them before they open theatrically is a draw, too.

I guess it’ll be a showtime call…..