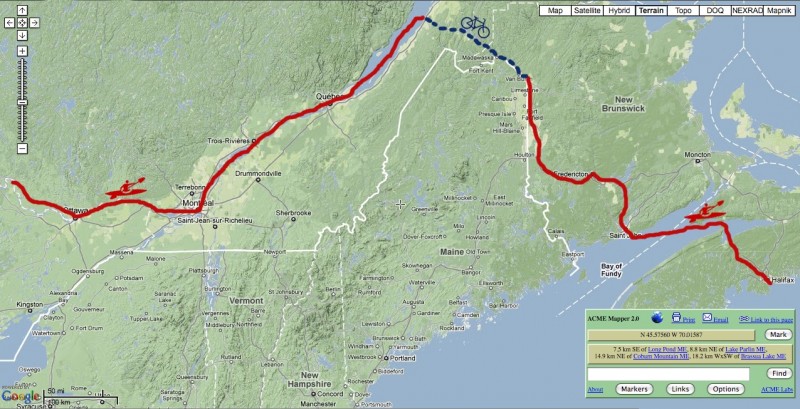 Though the Gala Opening movie is The Grand Seduction, Don McKellar’s new picture, the first film of the festival I took in was Paddle To The Ocean, which shows on Friday at 4:30pm as part of Atlantic Shorts 1. I  found it to be the perfect get-feet-wet (see what I did there?) entry for the festival, a sweet and gorgeous documentary about a man kayaking from Ottawa to Halifax.

Zac Crouse has been a fixture in the Halifax music scene for years, as a solo performer and as part of his band Caledonia. He works as a recreational therapist, and in his spare time he loves to kayak. He’s serious about it: he’s kayaked around Cape Breton and around Newfoundland. In 2009, his best friend Corey died in a kayaking accident. This left Crouse with residual Post-Traumatic Stress, something he’s been dealing with ever since. As a tribute to his friend, and as a way to provide some healing, Crouse set out to cross four provinces by kayak, a trip he and Corey had once talked about. To facilitate the distance, he decided to do some of it by bike, towing the kayak behind him on a custom-made rig.

I know Crouse a little, and have found him to be a genuine and friendly person. Those warm qualities shine through in the doc, which he narrates, as we join him paddling down the Ottawa to the St. Lawrence, cycling across part of New Brunswick, then paddling down the St. John to the Bay of Fundy, joining friends for that leg of the trip, and eventually crossing Nova Scotia to Dartmouth and Halifax.

Director Kelsey Thompson (with some help from Crouse’s b-camera) provides an absolutely gorgeous Canadian travelogue, the kind of jaw-dropping visuals that—without getting too precious about it—are what people love about this country. And Crouse is refreshingly candid about how he struggles with his mental health issues. As someone who spends a lot of time thinking about mindfulness in my day job as a magazine editor, it was great to hear those values elucidated. He talks about being active and creative as two key ways to tap into “the flow.” It’s unlikely the AFF will ever get a more crowd-pleasing Opening Gala than The Grand Seduction. A remake of the Quebec hit Le Grand Seduction, which was entitled Seducing Doctor Lewis in English Canada, the new picture was going to be directed by the original filmmaker, Ken Scott, but my sources tell me Mr Scott got the call from Mr Steven Spielberg to go to Hollywood to remake one of this other French language successes, Starbuck, which is now Delivery Man, starring Vince Vaughn. So Don McKellar stepped in, and he did a bang-up job. McKellar was here with Blindness in 2008, when they closed down a stretch of Argyle Street for the red carpet festivities. That was a party to remember.

Before The Grand Seduction got started at the Park Lane Cinema 8, there were many speeches: AFF Director Wayne Carter, Telefilm’s Michel Roy, AFF Program Director Jason Beaudry, the film’s producers Roger Frappier and Barbara Doran, and then director McKellar, and a hilarious tale from Mark Critch of hanging around the bay with The Pope of Newfoundland, Gordon Pinsent. And finally, Pinsent said a few words. He was typically serious and hypnotic, though would it be unkind of me to say I was worried he’d tell his whole life story up there? Maybe it was because at that point we were approaching an hour past the scheduled start time.

Anyway, when they finally got the thing going, the audience loved the movie, and it’s easy to see why. It’s the story of a small Newfoundland outport whose residents are trying to get an oil company to open a processing plant in their community. In order to make it happen, the insurance company insists a doctor be living in the town. Cue the seduction, getting a young doctor to stick around long enough for the oil company to sign on. A sterling cast of the best Newfoundland thespians are joined by Taylor Kitsch as the MD. He’s solid in the role, convincingly pretty enough and dumb enough to be fooled by the townspeople’s clumsy efforts. The great Brendan Gleeson plays the mayor, and Liane Balaban, who should be a big star by now, is a possible, though reluctant, love interest for the doc. Pinsent gets a lot of great lines, including, “I’ll punch you in the throat.” It’s the kind of movie that gives you a big hug; it’s impossible to resist.

The Gala Party down at the Cunard Centre was typically packed with schmoozers like myself. Even though it’s never going to be on Argyle again, it’s still a great time and a chance to catch up with all the filmmakers, writers, actors, musicians and various hangers-on.

What made it especially surreal this year was the appearance at the party of Udo Kier. I gather he’s in town making one of those St. Bernard movies, Beethoven’s Treasure, with Morgan Fairchild and Kristy Swanson.