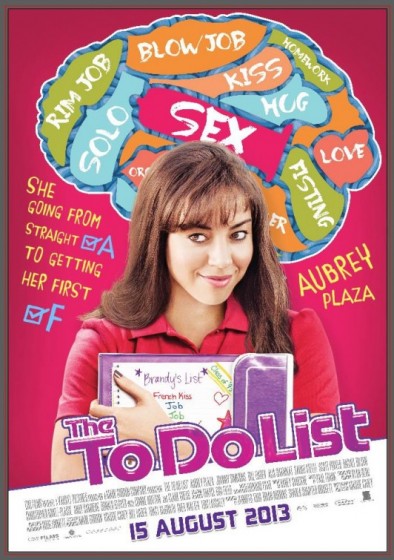 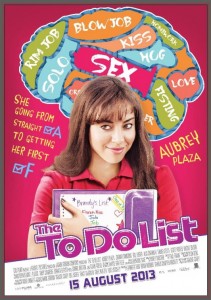 Written and directed by Maggie Carey

Oh, the damage to my own innocence from having given up 100 minutes of my life with Tom Cruise and Shelley Long in 1983’s Losin’ It. The movie belonged to a genre of teen comedy that has very happily gone the way of the dodo: the devirginizing romp. Oh, it still comes up from time to time, but rarely is there a whole movie built around it.

But while The To Do List resurrects that cinematic cadaver, what’s so refreshing about it isn’t the conventions or the raunchy humour, it’s that for the first time, the person looking for sexual experience is a young woman. It’s amazing how when you go and change that simple thing you get a movie very much worth watching.

Aubrey Plaza may only have shown thus far a single note as a performer—bored nonchalance—but she plays it so well it’s hard to not love her for it. Here she is Brandy Klark, ushered off the stage when she’s giving her valedictorian speech at her 1993 high school graduation with catcalls of “Virgin!” Determined to get some sex knowledge before she goes to college, she puts together a list of sexual activities she’d like to engage in, even ones she’s heard of but has no idea what they are. (No Google in 1993, made it harder to know about these things.)

Meanwhile, Brandy gets a summer job at a local pool. The pool-related stuff is pretty limp, including a fairly meh role for the otherwise hilarious Bill Hader—who happens to be the director’s husband—as Willy, the beer-drinking slob in charge. But being at the pool allows Brandy to lust after other lifeguards, like guitar-playing dude Rusty Waters (Scott Porter). Manipulating—in all sorts of ways— nice-guy Cameron (Johnny Simmons, who could be mistaken for Carey Mulligan’s younger sister) is part of the plan, too. Of course, there are lessons Brandy has to learn about the power of sex, and how it’s important, but totes not the most important thing, or some such trite teen moral.

The best parts of the movie are when Brandy is hanging with her friends, played by Sarah Steele and Alia Shawkat, and her wacky family: bitchy sister Amber (Rachel Bilson), and parents Clark Gregg and Connie Britton. The familial and friend dynamics feels the most improvised and fun, with subtle nods to Heathers, and lots of frank, soda-coming-out-of-your-nose-funny discussions about sex.

And if it’s not nearly as explicit as it might have been, The To Do List still feels like a refreshing step into a new world where young women can own their sexual selves without any nasty slut-shaming going on. Took awhile, but nice to finally see it.