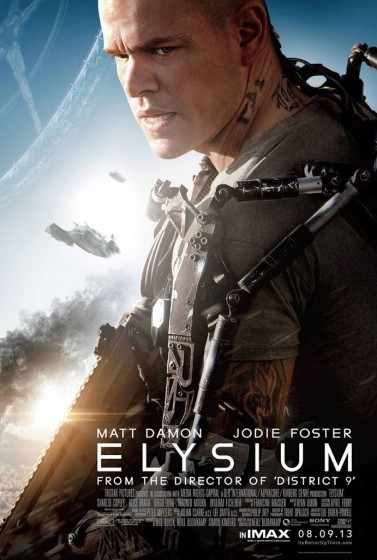 Blomkamp impressed everyone—including Academy voters, who nominated the film for a Best Picture Oscar—with his first movie, District 9. The South African-born, Vancouver-educated filmmaker made a slam-bang science fiction movie with definitive visual flair that even offered a tang of political allegory in the alien-apartheid plotline. It was obvious and heavy-handed, but it still suggested an unexpected sophistication from a film with squidios.

So, this time out he’s got a budget that more than triples his first film and genuine movie stars to sign on, Matt Damon and Jodie Foster, who are pretty smart with their career choices. Which is why I’m sad to report how disappointed I was in Elysium. There may be enough here to keep genre fans interested, but based on the pedigree, I was expecting a whole lot more.

Damon is Max, who works in Los Angeles circa 2054. The city is a giant favela, an over-populated eco-horror garbage dump. Max has lived here all his life, and while resorting to crime and bad behaviour, has dreamed of escape to Elysium. It’s the floating ringworld high above in orbit, where all the “haves” went years ago to live in a utopian Beverly Hills. The kind of place where high-tech sunbeds cures the populace of any illness. Jodie Foster’s Secretary Delacourt presides over Elysium security, butting heads with her superiors and swinging Colonel Jessup-style speeches to justify shooting down asylum-seeking refugees from earth.

The thing is, Elysium has no defence systems to speak of. Delacourt has to utilize a loose-cannon operative on the earth’s surface named Kruger, played by Sharlto Copley. He has a van, a surface-to-air rocket launcher and a bad attitude. Already I’m scratching my head. Really: A rocket launcher? Seems a highly impractical way to keep out those illegals.

But back to Max. He reconnects with a childhood sweetheart, Frey (Alice Braga), who has a daughter dying from cancer. And while working at his day job at a robot factory, he gets radiation poisoning. If he doesn’t get to Elysium and cure himself in five days, he’ll die. A local crimelord/revolutionary of Max’s acquaintance can get him up there, but only if Max will steal some key data from the head of the guy (the charmingly fey William Fichtner) who owns the robot factory. Max agrees, and gets fitted with a bulky exoskeleton, which gives him a much-needed boost in the physical strength department.

From there things get messy and loud.

This is an R-rated picture that didn’t really need to be. The bloody violence and f-bombs don’t do much to enrich the experience. And, frankly, the excellent set dec and production design don’t need the help. If there’s a reason to take in Elysium, it’s to immerse yourself in this world they’ve created. It’s a convincing place, with a lot of dilapidated-yet-futuristric tech—guns, communications, robots—to please the eye. I was thinking as I watched it: they should give one of the forthcoming Star Wars sequels to Blomkamp. His aesthetic is right on the money with what worked so well in the original trilogy.

But, unfortunately, his skill as a screenwriter isn’t much better than George Lucas’ on those much-derided prequels. Dialogue is massively clunky and obvious, and plot holes chew through the running time. Kruger is a walking plot hole and Copley doesn’t do much to give him any depth. Damon is solid as usual, but his powerful motivation to live—given this shithole he grew up in—seems a bit hard to fathom. Finally, Foster is borderline camp, a black hat in beige suits with no dimension.

Elysium feels like high-end concept—the rich and the poor live in separate worlds—filled with excuses for tech fetish and explosions. And generally I can get behind that, but not when it’s mashed together with so little grace and filled with characters I struggle to believe in.