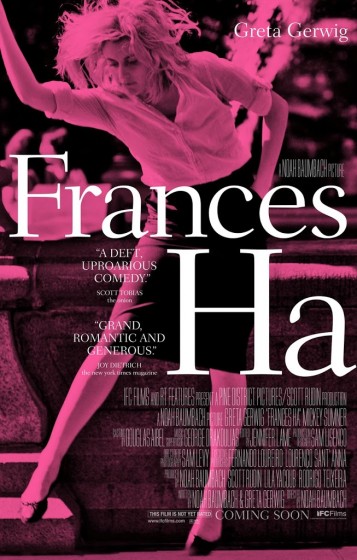 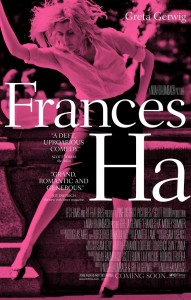 Directed by Noah Baumbach
Written by Baumbach and Greta Gerwig

The portrait of a hot mess, this is a self-conscious New York indie picture whose charm hinges on the lovely Gerwig. She coauthored and stars in this tale of a 27-year-old woman who can’t quite get her act together.

It’s a treat to look at, Sam Levy’s black and white cinematography evoking both the French New Wave (driven home by a mid-movie setting shift to Paris) and Woody Allen’s Manhattan. And Gerwig, who has been the best thing in a few not-great recent features (Damsels In Distress, Lola Versus) has been tipped as a potential break-out star in this project. I’d be surprised if it does it for her. She’s solid in the film, but her Frances is a tough one to warm up to.

She’s a chronically improverished dancer who doesn’t show a lot of real talent or dedication. Accordingly, she’s an understudy. She may have more gifts in choreography, but it seems the only thing that’s really important to her is her intense friendship with Sophie (Mickey Sumner), who she describes as “me with different hair.” Sophie may be slightly more solvent with a job at Random House, but Frances isn’t wrong, they do have a special seat-of-their-pants connection. That gets complicated by Sophie’s choosing an apartment in Tribeca over their platonic lifemate situation.

I wanted to like Frances. For all her social awkwardness, there’s a survivor’s toughness about her. She shows some genuine courage: she’s not (often) the author of her own destruction and she’s adaptable in bad situations. But I also found her frustrating, flakey and not nearly as adorable as maybe the movie expects her to be. Baumbach, who knows his way around awkward (Greenberg, The Squid and The Whale), frames her as this irrepressible urban sprite, but the film would have been more compelling as a genuine drama than what it is: a character study masquerading as a comedy without any laughs. Support from Girls’ Adam Driver and the milieu helps connect this film to Lena Dunham’s HBO series, but Frances Ha suffers in comparison.

That’s not to say there isn’t some poetry here, and Gerwig is compelling. A scene where she talks about the “secret world” she wants from a relationship is heartbreaking. And the picture is worth seeing for a glorious segment of Frances running/dancing down the street scored to David Bowie’s “Modern Love.”