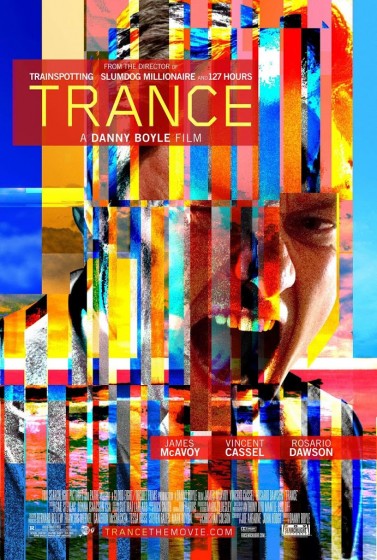 Like Steven Soderbergh, Danny Boyle is that rare filmmaker who can be called an auteur without really being a screenwriter. And just like Soderbergh, Boyle is so friggin’ talented and confident in his camerawork, editing, and general cinematic verve that he can make the most outrageous material stick. I’m not the first reviewer to compare Trance to Soderbergh’s most recent (and perhaps final) feature Side Effects, but there is a connection. Both are wildly implausible genre exercises spliced with something recognizably art house. Both are compelling even as they’re frequently ridiculous.

James McAvoy (in whose boyishness I tend to find a slightly greasy, often unlikeable leading man) is Simon, a high end fine art auctioneer who narrates us right into the opening credits, which take place on top of and inside his contused head.

A very expensive Goya just got lifted by Franck (Vincent Cassel, reptilian as ever, but his English is getting much better) and his crew of art thieves. Turns out Simon was the heist’s inside man, but when he gets clobbered he forgets where he put the painting. Following some fingernail-lifting torture for good measure, Franck is convinced that Simon can’t remember where the Goya went. The thieves engage Elizabeth (Rosario Dawson), a therapeutic hypnotist, to dig into Simon’s subconscious for the deets. It takes no time at all for Elizabeth to go from pawn to full femme fatale, wanting an equal cut for locating the painting. And it’s clear she knows much more than she’s letting on.

This is where is gets a bit goofy. I don’t want to say too much. The peculiar twists of the plot carry with them quite a bit of pleasure as they unfurl, but there are moments, especially in the second act as Elizabeth tries techniques to unlock Simon’s memories, that rupture credibility.

But that doesn’t matter. What’s fun is how the film plays in its psychedelic noir tropes. (I think I just invented a new subgenre there, “psychedelic noir”.) Boyle’s filmmaking is typically kinetic, weaving a popping soundtrack with urban hum, gorgeous London street scenes and sexy interiors, all glued together by visuals that provide a dark world slightly off-kilter, leaving you unsure as to whether we’re in the imagination of a character under hypnosis, or seeing what’s actually going on. This uncertainty compounds as we go along, leaving this viewer—and I know I’m not the only one here—confused as to what the hell is happening.

But that was pretty much OK. As Boyle makes visions of the French countryside and hairless genitalia both key parts of the plot, you either go with it and enjoy or shout “rubbish” at the screen.

I certainly was never bored. Even when our leading man, Simon, steps back and lets Elizabeth and Franck take over the story, making for a weird love triangle. In the midst of it all, McAvoy is fine, Cassel compelling and, for the first time in awhile, Dawson gets a lead worthy of her talent, one that allows her to run away with the movie. And she’s also refreshingly immodest, bless her, though I wondered why it is she has to be full-frontal and her two male leads, who appear naked in the film, don’t show off their tackle.

As for its conclusion, I’ll just say the plot’s onion layers keep on peeling until we get to an explosive core that can’t quite compare to all that went before. But like I said, it doesn’t really matter. Just go with it.