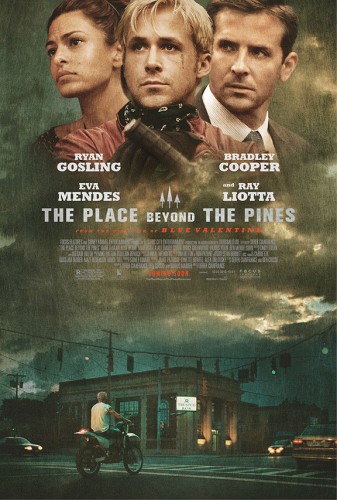 Three stories, interlocked. The first: A stunt-driving motorcyclist (Ryan Gosling) returns to Schenectady, New York—a city whose name in Mohawk means, roughly, the title of this picture— and finds a woman (Eva Mendes) and an infant. Cycle guy decides to stay, to try and be a father to the kid, and robs banks to offer support. The second: A rookie cop (Bradley Cooper) shoots a perp and becomes a hero on the force and to the people of Schenectady. But the department is corrupt and he’s feeling some guilt about his role in it. The third: Two teenagers (Emory Cohen and Dane DeHaan) become friends at a Schenectady high school as the legacy of their fathers catches up to them.

I can’t fault Cianfrance his ambition—his only previous feature was the Gosling/Michelle Williams tragic romance Blue Valentine, and this feels like a much larger film. Here he tells a sprawling tale of American dreams—with Bruce Springsteen on the soundtrack, you know you’re dealing in smalltown myth. And male ambition without restraint is thematically writ large, along with that old chestnut, the sins of the father. But in all that I think he bit off much more than he is able to chew.

For starters, the thing is just too long. It’s a juggling act, moving from one story to another, and it takes a lot to hold the audience’s interest. It lost much of mine.

Two of the stories happen consecutively, though with another script rewrite they could have overlapped and gelled, which might have made for fewer narrative longeuers in those acts. And as we cross the 100 minute mark, Cianfrance is really trusting that we’re still interested and engaged while letting scenes meander and giving too much time to less-interesting supporting cast, showing instead of telling. This kind of movie needs a ruthless editor, and I didn’t see much evidence of it.

Though I applaud Cianfrance for pulling back in the final scenes, resisting the urge to go full Greek Tragedy with this one, the emotional high point, the place where the film could have ended nicely, was in the meeting of the two teenagers. Right in the park as they smoke a joint, that was it. Their possible friendship offered a sweet irony, and leaving it right there would have provided an ambiguity that I think would have made for a stronger all-around story.

I won’t deny the teens are very good—Cohen reminds me of Tom Hardy. Hell, all the casting is good. Gosling is typically compelling, Mendes is impressively de-glammed. (Consider the role she played in Holy Motors last year.) I wished the women in the story, including the versatile Rose Byrne, had more to do, but this really is a tale of fathers and sons. Cooper is, well, he’s OK. He makes the best of what is a bit of an underwritten part. I was never really sure if his cop is naive, dumb, smart, brave or just cunning. Maybe all of the above.

And I really liked the sense of place. I’ve never been to that area of upstate New York; I felt like I got a good look at it.

But Cianfrance, when he’s not soaking up the local colour, is a purveyor of distracting indie aesthetics, particularly the overuse of handheld camera. And here, while I got what he was aiming for—an indie epic—The Place Beyond The Pines strains for a significance it never quite reaches.