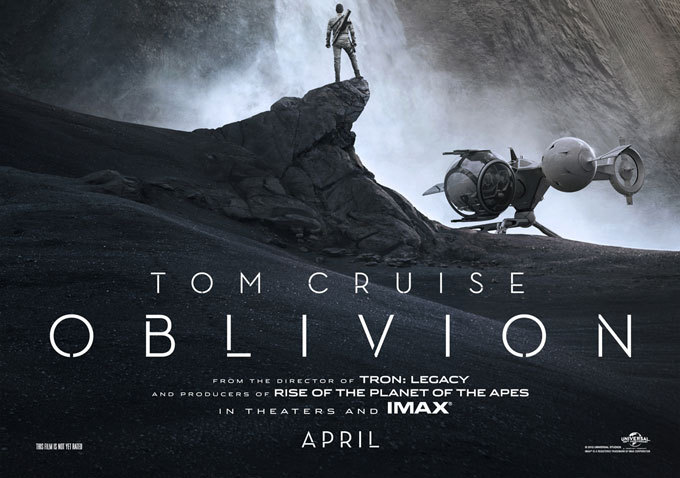 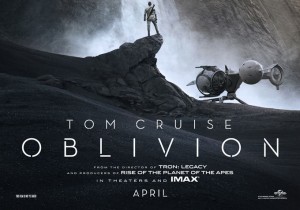 Directed by Joseph Kosinski
Written by Kosinski, Karl Gajdusek, Michael Arndt, from a comic by Kosinski and Arvid Nelson

Today I really miss Roger Ebert. I would have loved to have read what he thought of Oblivion. I know he enjoyed the work of Alex Proyas (Dark City, Knowing) for the expansive vision in his science fiction films. I found Oblivion to be very much in keeping with that kind of effort.

Expansive is the word for Oblivion. This is a film that feels like it was shot in 70mm and its scope is the best thing about it, smoothing over a few narrative bumps along the way. It’s also hard scifi, self-contained, unconnected to any other franchise or brand and unlikely to be sequeled. And because of that, I had a lot of time for it.

Tom Cruise is Jack Harper, a much more personable role and a better fit than his recent Jack Reacher. This Jack is a planetary caretaker circa 2077, living in a condo-in-the-clouds with his lady, Vica (Andrea Riseborough). She reports to Sally (Melissa Leo), who watches their work from somewhere high above. In his pod-plane, Jack repairs a series of weaponized drones that provide security to fusion reactors, drawing energy from earth’s salty seas. Years ago there was a war with aliens—called Scavengers—and even though humanity won, the planet itself was the casualty. Humans now all live off-world, out near Saturn, and those reactors are somehow transferring energy to them. Don’t ask me how.

The thing is, the Scavs are still fighting. Small pockets of them live on this scorched earth, occasionally sabotaging those energy reactors.

There are a few niggling issues we learn about right from the beginning. Jack and Vica both had their memories wiped for some reason. It helps them do their job, apparently. Really? How? And Jack is having dreams of life before the war, at a time when he shouldn’t have even been alive. In those dreams he’s with another woman (Olga Kurylenko), at the top of the Empire State Building. Who is she? And why does Jack have a little shack in a secret valley down on the planet, a shack Vica doesn’t know about? If you’ve seen the trailer, you know there are other humans on this dusty world, including Morgan Freeman and Nikolaj Coster-Waldau (Jamie Lannister from HBO’s Game of Thrones). What’s their deal?

This is a tale that has serious science fiction elements and is smart about its reveals. Much of the pleasure of the story comes from discovering the truth of Jack and Vica’s situation. And while the film is deeply indebted to a number of other science fiction classics of the past, everything from The Planet of the Apes to Silent Running to Wall-E to The Road Warrior, it manages to be original enough to not be slavish in look, feel or execution.

I really liked the production design. Those drones, the pod-plane, the condo-in-the-clouds, all pretty wonderful to look at. Very clean and distinct. I do wish the score had been a bit more subtle. There are times, especially in the first act, where the epic soundtrack overwhelmed some of the drama, which at that point was a bit low key.

Cruise is, as usual, a take-him-or-leave-him proposition. He convinces as an action hero due to his physical skills—while the action sequences are probably the least interesting part of the film—and emotes at the appropriate moments, there’s not much new here to make you like him if you weren’t a fan to start with. There’s also the unfortunate way directors feel the need to frame him as a hero and saviour. That tends to bore. Oblivion‘s leading ladies, Riseborough and Kurylenko, provide a bit more nuanced work.

Kosinski has a great touch in the visuals, as he showed in Tron: Legacy, though maybe not as much of a command on coherent storytelling. This is a big step up from that picture, mind you. Again paired with his Tron: Legacy cinematographer Claudio Miranda, who won an Oscar this year for his work on Life of Pi, the images from this movie are still living in my brain. As a post-apoclayptic vision, it definitely compares favourably to recent genre efforts such as I Am Legend and AI: Artificial Intelligence.

I really enjoyed Oblivion. There are moments that drag—a canyon chase is duller than the Star Wars: Episode One podrace or Tron: Legacy’s moments of speed, a scene in a ruined football stadium serves no real purpose and key flashbacks are shared at a dramatically inopportune moment. And there are places where holes in the plot aren’t ever quite satisfactorily filled—how did a spacecraft orbit earth for decades and never burn up or be destroyed by the bad guys? But the picture deals well in themes of identity, memory and basic humanity. All that scifi mortar kept me thinking.

By the third act, anyone who is well-versed in the fantasy genre will see where it’s going;  a late-game reveal of a changed plan and a loose end left to be tied up in the final shot were no surprise to me. But I was down with the way it all worked. Not a flawless dramatic resolution, but quite satisfying.

And the bells and whistles in the overall package kept me solidly engaged. You could do much worse than spend some time in Oblivion.