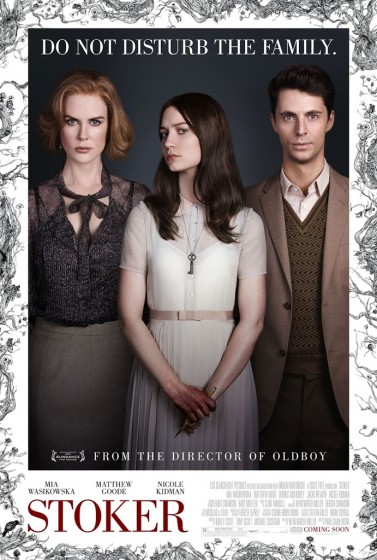 A little like if Dark Shadows was played totally straight, Stoker is a concoction both fluffy and gothic, a self-conscious Hitchcock pastiche that dances on the edge of camp before eventually becoming the thing it pretends to be.

Park Chan-Wook (Oldboy and Thirst are the Korean director’s films I’ve seen) has a great confidence with the camera and a rich, melodramatic tone. I find it fascinating when directors from other cultures head to Hollywood, as they often reinterpret American film genres in new and interesting ways, through the prism of their own experience and storytelling. That’s certainly is what’s happened here, in a film produced by Tony and Ridley Scott’s company Scott Free.

India Stoker (Mia Wasikowska, channeling a slightly less fragile Jennifer Jason Leigh, in my mind) is an 18-year-old living in a large, old house at an indeterminate era—the cars and cellphones eventually give it away, but the costumes and props suggest it could be any time from the 1950s. India is a sullen, introverted type, with a near-to-supernatural ability to hear the slightest sound, from spiders crawling on the floor to whispers in other rooms. This—and her patent spats—paints her as an outsider right away. She has a Wednesday Addams-esque resistance to high school teasing and a comfort with guns: she liked to hunt with her father, Richard (Dermot Mulroney).

Sadly, Richard has just died, burned up in his car. India’s mother, Evelyn (Nicole Kidman), is vaguely put off, but she and her husband (and even her daughter) haven’t been close. She’s also self-medicated—by alcohol, apparently—and prone to sleeping a lot. This is a great role for Kidman: she still acts brilliantly with her eyes, even as her glossy and strangely immobile face provides a mask the character requires.

Into this unhappy house comes Charlie (Matthew Goode), Richard’s mysterious brother. He’s smooth and good-looking and sinister. We know he’s no good because his every appearance on-screen is accompanied by ominous music and peculiar tracking shots. While dallying with Evelyne, he seems inordinately fascinated with India. What is their bond, and is it more than just blood?

The first act of Stoker throws all these elements together with a fussy, attention-grabbing directorial approach, where every camera move and edit is choreographed in a way that the audience never forgets they’re watching a film. It throws the onscreen drama firmly into the realm of camp, where some scenes are borderline hilarious. That probably wasn’t the intention of Park Chan-Wook, and I think this is where something is lost in the translation, in the transposing of cultural cliches. I was ready to write the picture off as a formalist experiment that didn’t work.

But then, as we go along, the stylistic flourishes settle; the plot and characters begin to manifest with some feeling. There’s a great scene with India, Charlie and a boy from her high school in a moonlit park. This is told in flashback, with a mud-covered India taking a shower, seeming to be upset the whole time. It’s only at the scene’s end do we get a chilling understanding of how India feels sex and death intersect.

This is the moment where Stoker overcomes its self-consciousness and fully inhabits its grim suit and tie, where its need to transgress has genuine weight and isn’t just parlour trick play-acting. From there on, the dark pleasure of the story comes authentically, rather than with an ironic twist.

But can I recommend it? To fans of the creepy—both those who enjoy the Tim Burton-esque kooky/ooky and those who may be more into Brain DePalma’s brand of weirdness—there’s a lot here for you. But I can also see how this hermetically sealed tale will tick some people off. It didn’t me, though it took awhile for my skepticism to settle.