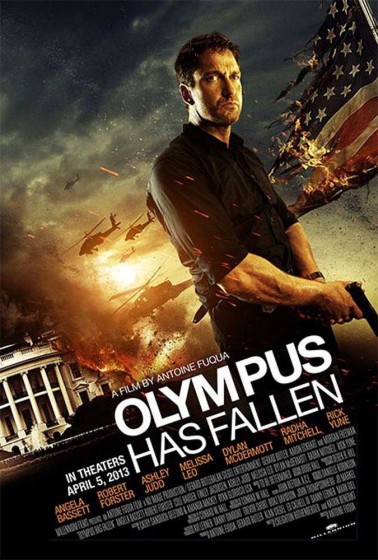 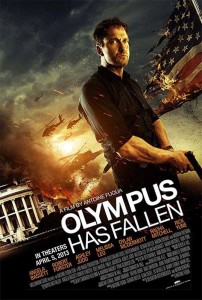 It’s been awhile since I’ve seen such an egregiously lunkheaded movie as Olympus Has Fallen. Happy to let its talented cast deliver recycled, leaden dialogue and go through the motions of a recycled, leaden plot, its real failing goes beyond that, because a movie can be unoriginal, stupid, and still entertain. What makes Olympus Has Fallen particularly repugnant are the repeated notes of right-wing American jingoism. All the knee-jerk responses to Bigelow’s Zero Dark Thirty about it advocating torture and xenophobia that were completely off-base are right on target here. This is laughably bad stuff, insulting its audience.

Gerard Butler (I like to think of him introducing himself with his original, thick Scottish accent: AHHM GEHRRY BOOOT-LAH!) is Mike Banning, a secret service guy on the presidential detail (Aaron Eckhart and Ashley Judd as the first couple) who falls out of favour with his boss one bad, snowy night near Camp David. Banning gets consigned to a desk job at the Treasury Department, while his wife (Radha Mitchell) tries to get him to pay attention to their life together.

Fortunately for Banning, the North Koreans invade Washington DC, led by Rick Yune, who was just as unthreatening a villain in Die Another Day, though there he had better make-up. Banning’s given a reason to redeem himself when the White House gets taken in a massively implausible military operation, putting Speaker of the House Trumbull (Morgan Freeman, in every close-up looking like he knows he’s much better than this material) in charge while the terrorists hold POTUS and his other key staff hostage. Quality character actors Angela Bassett, Melissa Leo, Cole Hauser and Robert Forster are wasted. Forster, playing a grumpy general, at one point actually exclaims, “Fuckin’ shit.” That’s some poetry right there.

What we then get is Die Hard at the White House. The film outright steals two or three scenes directly from that much finer action movie, which I could forgive if the action sequences here weren’t over-edited and poorly lit, or Butler did more than jut his jaw and look steely. And while there is some satisfyingly bloody violence (if you like that sort of thing), the whole endeavour is so nasty, I didn’t care for a second about anyone who was in jeopardy. Don’t get me wrong, I have time for a cartoon actioner that serves up some fun. This isn’t fun. I really can’t say it any better than Noah Berlatsky did at The Atlantic, on the subject of Olympus Has Fallen‘s septic vision. And, yup, a portion of the people watching at my screening also laughed with glee at the scene of Banning taking a knife to helpless prisoners.

As the third act starts to resolve in exactly the way you know it’s going to, there’s a painfully obvious red herring where everyone onscreen assumes a key character has been killed. The filmmakers naturally show the downcast faces of many characters who are supposed to care about this, believing this transparent ploy. Are we supposed to buy it, too? At this point I wanted to buy a ticket to LA, track down Antoine Fuqua and give him a piece of my mind. How stupid do you think I am, Antoine?

The most disappointing thing in all of this is Olympus Has Fallen is a hit. And, joy of joys, White House Down, another movie with a very similar premise is right around the corner. Dare we hope for a better take on this material? Even from notorious disaster movie hack Roland Emmerich, it couldn’t be much worse.