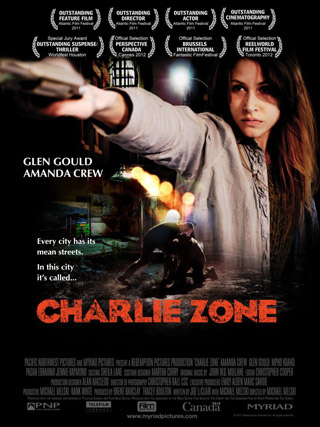 A heads up for FITI readers living in Halifax, Cape Breton or Toronto, Michael Melski’s thriller Charlie Zone is opening today at a cinema near you.

It’s a tale of the dark underbelly of Halifax, one that I totally believe exists but is rarely represented in locally made movies. I think the last time I took in a local feature like it was the excellent and underseen Poor Boy’s Game.

As in PBG, pugilism plays a part. Glen Gould is Avery, a former pro fighter who has been reduced to bare-knuckle brawls in north end parks for cash. He’s also a thug for hire, paid to find and rescue a young woman, Jan (Amanda Crew), who’s become a junkie and fallen in with a pair of dealers at a crack house. The relationship between Avery and Jan is the centre of the film, and as their personal histories are revealed, they figure out how to help each other through the wreckage of their lives. Though the film has echoes of Tarantino and De Palma, Melski’s directorial brush is heavy with a noir that feels particular to this region. Atlantic Canada has similar weather to Scandinavia, why don’t we make more crime dramas like they do? Maybe Charlie Zone will spark a trend.

I’ve seen a rough cut of the film, then a festival cut in 2011, so while I don’t feel prepared to review the version film going into cinemas today, I can comfortably recommend it to lovers of crime drama and anyone who wants to support homegrown movies: Don’t miss it.