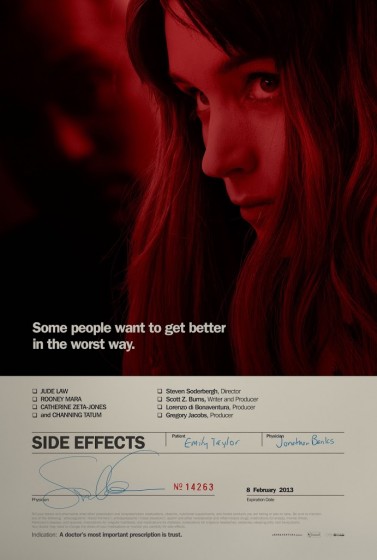 Is this Steven Soderbergh’s last feature film? If it is, it’s a strangely fitting one, an exemplar of two of Soderbergh’s distinct strengths: clean, uncluttered humanist storytelling and a zippy way with genre.

That these styles—in this film anyway—make it something of a mash-up is OK with me. Going into it, just know that Side Effects feels like two movies spliced together. And while one of those movies might have been inspired by Ordinary People, the other feels a bit like Basic Instinct.

Emily Taylor (Rooney Mara, haunting) is a New York 20-something who’s been waiting for her husband, Martin (Channing Tatum), to be released from prison after doing a four year stint for insider trading. They lost everything: a big house and friends and status. He’s back and immediately wants to restart his professional life, but she struggles with depression. Her physician, Dr. Jonathan Banks (Jude Law, aging interestingly) is overworked, supporting his unemployed wife (Vinessa Shaw) and stepson. Banks is tipped off by a colleague (Catherine Zeta-Jones, at her reptilian best) about a new kind of SSRI anti-depressant, prescribing it to Emily. She sees an immediate improvement in her mood, except with a somewhat-disconcerting side-effect; she sleepwalks (and sleep-prepares meals).

At this stage the story is largely about Emily and Dr Banks and the over-medicated urban society in which we live. Soderbergh keeps us off balance, flipping between Emily’s battles with the “poisonous cloud” of mental illness and Banks’ life and professional stress. As an audience member I wasn’t entirely sure where to place my sympathies while I enjoyed the peculiar thread of Soderbergh’s storytelling.

Emily does something terrible, and then we have a brief courtroom drama: who is at fault: the woman, the medication or the physician who prescribed it? Now we’re getting into some really rich and interesting territory.

That’s where the genre piece starts to bubble up in thriller form. There are whispers of it in the first act, but when it manifests heavily in the second, all of a sudden it’s an entirely different movie. A far more implausible, ridiculous movie.

And that’s not to say I didn’t enjoy it; there’s plenty of entertainment value, but don’t expect any of the characters introduced in the first part to maintain credible distinguishing elements. As my cinepanion noted, one person starts dumb and gets very clever, while two other characters who started smart go the other way.

By the time we get to a late-stage, same-sex make-out scene, I wouldn’t have been surprised to see Sharon Stone make a panty-less cameo. It’s almost as if Soderbergh is saying, “Hey, look, I can do all this highbrow sensitive stuff and, bam, right in the kisser I’ll give you some wacky, convoluted sex-thriller material too, all in one movie!”

Whether you go along with it will depend on whether you’re down with the mash.