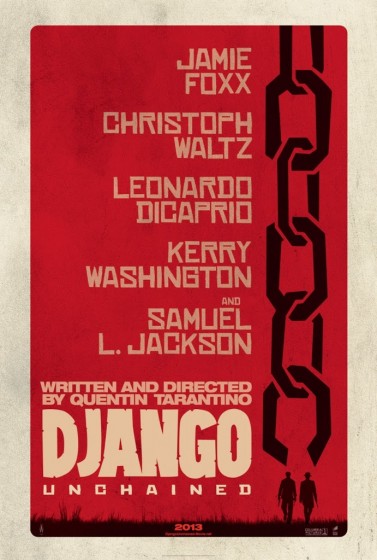 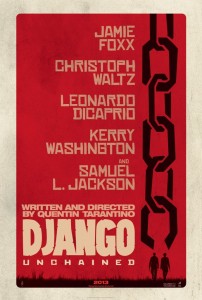 Written and directed by Quentin Tarantino

I suppose it was inevitable that Tarantino would get grief about his movie Django Unchained, a western that takes place in the antebellum south. It’s a grand adventure that borrows a lot from Sergio Leone, but with no hesitation in the script to use what we all euphemistically call “the n-word.” Tarantino is too direct for euphemisms, and as a white filmmaker he’s risking accusations of exploitation and even racism from critics and fellow filmmakers, such as Spike Lee. (Though not all African-American filmmakers agree with Lee.)

I have noticed how few films deal with the spectre of slavery that still hangs over American culture, whether from white or black filmmakers, that aren’t dry, stately dramas (like Lincoln, for example). Studios probably find it a bit too icky to invest in stories that get into touchy racial subjects unless there’s a clear feel-good archetype for white audiences (see Emma Stone in The Help). For what it’s worth, while part of Django Unchained is cartoonish, it feels to me that it’s telling a story from an honest place, whether it’s historically accurate or not. I also understand the nuanced concerns about what Samuel L. Jackson’s character represents in terms of our idea of slavery, the myth of the thing. And I see the counter arguments.

Here’s my bottom-line thought: If one accepts the undeniable evil of slavery, as one might have in Inglourious Basterds about Nazis, I think it allows the filmmaker room to make his movie, clearly a fiction, without resorting to exploitation. The story then goes out of its way to provide a wish-fulfillment revenge fantasy to its audience, whatever its ethnicity. (Provided the audience isn’t people who are pro-slavery or Nazis, I suppose.) And Jamie Foxx, an African-American, is the clear-cut hero, someone with a lot of agency in his own fate.

I guess all this is to say, I didn’t think the film was offensive. And, in the end, if a pulpy picture like this can prompt real discussion on the way the history of slavery is perceived in the wider culture, isn’t it doing a service?

Anyway, beyond all that, what of the film?

Well, it’s recognizably Tarantino-esque, from the first frames. The sharp editing, a flawless selection of music for the soundtrack, a certain verve in the cinematic storytelling, the wordy conversations capped with startling bloodiness. Unlike Inglourious Basterds, he’s not providing a clinic of suspense—with the exception of a scene deep in the third act involving a skull and a saw—but rather a broader romp. And how broad? Well, there were moments in the first and second act where I thought I was seeing outtakes from Blazing Saddles—especially the scene with the KKK arguing about holes in their bags.

King Schultz (Christoph Waltz) is a dentist-turned-bounty-hunter who purchases a slave, Django (Foxx), in order to secure his aid in finding three men he can identify. Once he does, he gives Django his freedom, but recognizing a kindred spirit, he offers him a partnership, and his help finding Django’s wife, Broomhilda (Kerry Washington), who was sold to a Mississippi plantation owner, Calvin Candie (Leonardo DiCaprio). Along the way they meet and occasionally shoot a lot of people, including toughguy actors of the past such as Don Johnson, James Remar, Bruce Dern and Lee Horsley. It’s a testament to Tarantino’s stature as a director he can attract these performers, as well as cameos from Jonah Hill and in a single shot without even a line, Amber Tamblyn, who is credited as Daughter of a Son of a Gunfighter.

The laughs and splashy action come thick and fast, with Tarantino relishing being able to play with the genre’s tropes, lots of close-ups on sidearms and squinting eyes. Almost the entire third act, a drawn-out emotional conclusion, takes place at the Candieland plantation, mostly in the course of a single evening, complete with a false ending that tacks on an extra 15-or-so minutes to the movie that I felt it didn’t need—along with an entirely superfluous role for the director, sporting an Aussie accent almost as bad as the cockney burr Tom Hanks tried on in Cloud Atlas. But, at 165 minutes, the movie flies by. 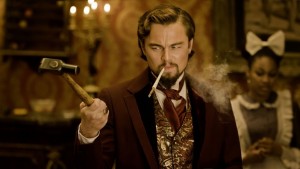 The film gives Leonardo DiCaprio his best role in ages. As Candie, he chews through the long, dialogue-stuffed scenes, frequently going big in a Jack Nicholsonian way. His character is despicable, but with the best Southern manners, very smooth and polite, too, providing a dynamic tension. Disappointingly, from a filmmaker who in the past has created such great parts for women, Washington’s character is pretty much only a damsel in distress.

For those who rank Tarantino’s output, I’d say Django Unchained is consistently solid, while not quite at the virtuoso level of Pulp Fiction or Inglourious Basterds.