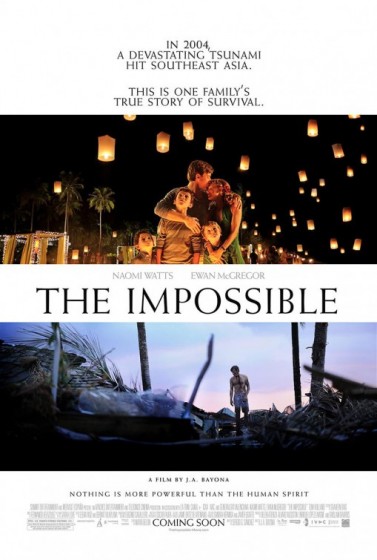 This is an odd thing, an intimate disaster movie. Can’t think of too many of those. It’s also, for much of the running time, a post-apocalypse picture. Everything in this family’s world is ripped from its moorings. They’ll never be the same again.

It’s based on the true story of a Spanish family who were on the Thai coast during the 2004 tsunami. Enjoying their Christmas holiday in paradise, they (and everyone else) had absolutely no warning when the earthquake-spawned wave hit on a sunny Boxing Day afternoon. For the sake of Hollywood, the Spaniards have been turned into Brits, Henry (Ewan McGregor) and Maria Bennett (Naomi Watts), with their three sons, tween-ish tough-kid-hiding-sensitivity Lucas (Tom Holland) and the two younger boys who generally are just required to look cute, Thomas (Samuel Joslin) and Simon (Oaklee Pendergast).

In most ways Bayona and Sanchez, who worked together on The Orphanage, avoid the more typical disaster flick conventions. There’s plenty of silence in the film, and though the swelling strings do strike during the appropriate tearful reunion scenes, simplicity and a respectable lack of unnecessary adornment are the orders of the day. By focusing on one family as opposed to an ensemble, they don’t need to juggle multiple character arcs. This is quite basic, human-versus-the-odds time, so in that regard The Impossible reminded me more of 127 Hours.

What wows right off is the scene of the tsunami, arriving early and revisited in flashback later. If you ever wondered what that experience might be like—I can’t say I have—but I feel like this film approximates it with a frightening realism. I’m assuming CGI must have been utilized somewhere in here, but I saw no evidence of animation or trickery. The sound editing is also astonishing. And Bayona does not try and spare us the horror of the event or the human cost in the aftermath.

Otherwise, while McGregor is typically reliable, it’s Watts who turns in a performance above and beyond. Her Maria is never anything but authentic. With the help of a talented make-up department, she conveys all the physical and emotional trauma her character lives through with raw, wet intensity. More of the plot I’d rather not disclose, as the reveal of the family’s fate is key for the appreciation of the drama. But thanks to the performances and filmmakers who let it all unfold in an unfussy way, letting the images, sounds and faces tell the story, I suspect The Impossible will rank among many’s list of the year’s best. It may make mine. Certainly, among the Oscar bait in recent weeks, it packs more punch than a dozen Lincolns, Life of Pis or Argos. I challenge you to forget the images in this film.

One thing I’ll touch upon at the close, having read some advance reviews. It’s in response to a small but vocal political outrage, more or less saying this: by telling the tale of a white, privileged family, The Impossible somehow spits on the memory of the hundreds of thousands of Thais, Sri Lankans and Indians who died in that horrendous disaster and the many more who were displaced after. While I wish there were more of the locals’ experience represented in the story, and I recognized the family was extraordinarily lucky, all things considered, I still find it to be a knee-jerk reaction: so you’re saying there isn’t anything universal in the suffering depicted here? Isn’t that at the bedrock of this kind of tale, the fact that we all share a common reaction to the arbitrary fury of nature? That the picture chooses to see what happened through the prism of one family’s experience is the result of who is telling the story. That the picture was made at all is based on an economic prediction as to who will pay to see it. This I can’t deny. But I don’t see how that makes it disrespectful. I think this is a case where you can choose to go looking for offence, or choose to take it as it is.

On a separate note, I think one could argue the choices the director made in order to heighten suspense in the third act were manipulative, especially when at one point characters narrowly miss finding each other. I easily forgive it; nothing is drawn out. At 113 minutes, The Impossible feels exactly the right length.