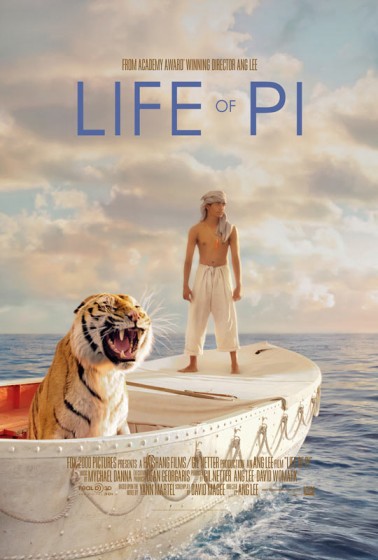 So what to make of Life of Pi? I enjoyed the novel, and the first thing I can say about the film is that Lee is true to it. It flows similarly as the source material, and its themes of faith, man versus nature and the subjective truth of storytelling, all are transferred lovingly to the cinematic version.

But I can’t say I enjoyed myself much in the cinema. There’s something absent here. It’s not a problem in the special effects—if you stop by here regularly you’ll know my typical frustration with Computer Generated Imagery, how when I’m aware I’m watching something created in a computer, at least when the setting is realistic, I’m taken out of the movie. But for the most part, the CGI here is excellent.

The problem I had is with how anodyne and inoffensive the film is. In the end, the one way that Lee has always impressed me is by getting me to care about his characters. Here, Pi Patel and his tall tale didn’t engage me. And as I didn’t care about him, I didn’t care much for his story.

Pi is actually named Piscene, after a French swimming pool. The literary indulgences of Martel’s novel seem quirky beyond belief in the opening section of the film, but Pondicherry is so gorgeously shot, it’s easy to forgive the story the elements that feel overly writer-y and exaggerated. Pi (played by Gautam Belur and Ayush Tandon as a child, Suraj Sharma as a teen and Irrfan Khan as an adult) goes to some length to change his name as a result of the teasing he receives at school, instead embracing the mathematic equation to the point where he can recite it to hundreds of decimal points. How he manages this isn’t really explained, but it doesn’t take long to let go of these kinds of questions. It’s all in flashback anyway, as the elder Pi is telling the tale to a journalist (Rafe Spall, in a role that was originally intended for Tobey Maguire) in Montreal. It’s the reporter who’s clearly not doing his due diligence.

Anyway, Pi manages to overcome his name and find romance. His parents (Adil Hussain and Tabu) run a zoo, but hard times force them to pack up the animals and move to Canada, where they plan to sell the critters and start afresh in Winnipeg. While crossing the Pacific, the boat sinks, leaving Pi in a lifeboat with a tiger, zebra, orang-utan and hyena.

The bulk of the movie takes place in this boat, and big props to the CGI department. Was Sharma actually ever on the high seas? I couldn’t tell you. At one point even I was seasick. And there are moments of real beauty when the movie takes a turn into the expressionistic (see below). I gather the tiger was largely CGI, and when it worked (under the tarpaulin, for instance) it was frightening and amazing, when it didn’t (swimming around the boat) it looked just like every false CGI effect I’ve ever seen, and took me right out of the enjoyment of the film. That they managed, in my subjective estimate, 80 percent of the former and only 20 of the latter means digital sfx teams keep getting better, and I’ve got to give them credit.

Perhaps the thing that impressed me the most is the 3D; this may be the first time I found 3D actually improved the movie experience. I still don’t like how the glasses make the movie darker, but there were a couple of times when the effect brought a genuine shock and surprise that I might not have had otherwise.

But all this is to say, I just wasn’t into Life of Pi. Maybe it was too faithful to the source material, stealing away some of the thrill of discovery for me since I knew what was going to happen next, but there are plenty of movies where I know full well what’s going to happen and I’m still emotionally engaged. Here I felt separate from it, observing but not involved, even as I was occasionally wowed by the technical bells and whistles.

And while I acknowledge Sharma’s commitment to the role, as much as his director is to covering Yann Martel’s story to the screen, what’s delivered is a middlebrow fairytale with some clever tricks up its sleeve where the final disposition of the teller and tale never overly concerned me.