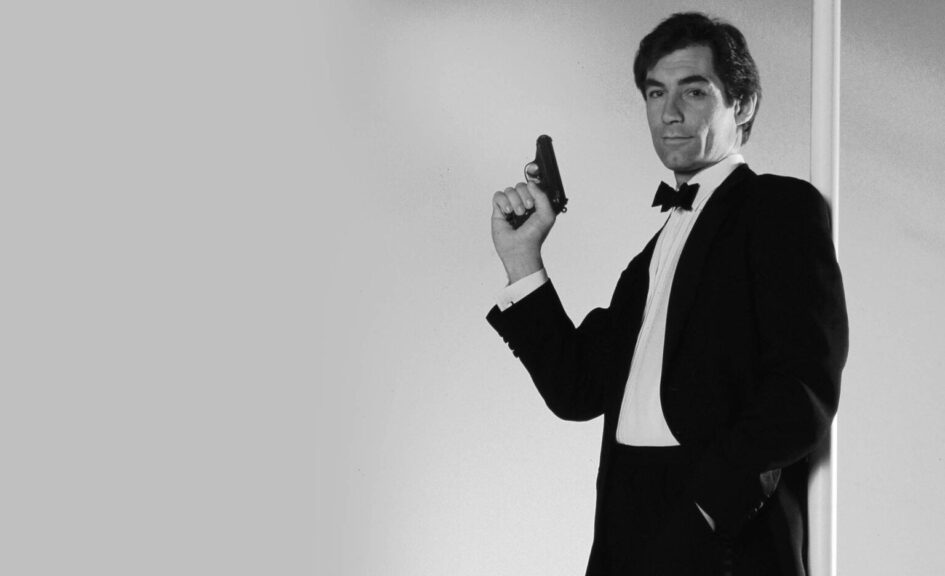 There are those who think Dalton’s tenure as 007 was a high point for the series — I’m not one of them.

I get what the producers at Eon Productions were trying to do: a course-correction. The last couple of Moore Bonds had gone too camp, too silly. In Timothy Dalton they had someone who cleaved closer to the Ian Fleming novels’ imagining of the character. He was both a little more emotional and more physical. Maybe more dangerous. And the two movies he starred in were pared down, less bloated. A bit more realism, add more ’80s action-movie tropes and cut back on the jokes and the gadgets.

While I see the idea of a leaner, budget-Bond approach could work, and understand that enormous sets don’t always equal enormous excitement, the two Dalton pictures are a bit bland. We get a few explosive ingredients, but they somehow don’t quite ignite. If you’re going to watch just one, go with the second. 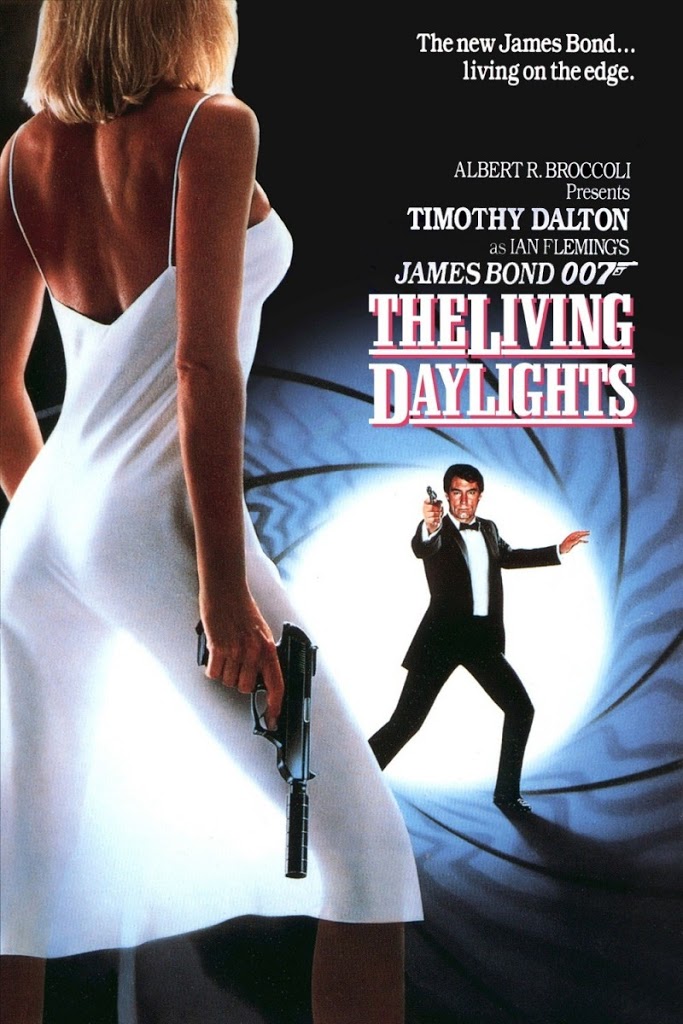 The pre-credit sequence starts promisingly: MI:6 are involved in wargames, infiltrating the British security at Gibraltar. But things go pear-shaped, and Bond is clinging to a jeep careening at high speed down the side of the mountain. He eventually lands on the deck of a yacht, impressing the lady he finds there.

Cue the opening credits, some of the cheapest in the series — the blonde in a champagne flute is an all time low. I submit A-ha’s theme song without comment.

Bond’s in and out of Bratislava — he has no trouble crossing the Iron Curtain at will — handling the defection of a Soviet general (Jeroen Krabbé). But all is not as it seems, as the KGB grab the general and Bond has to secure the general’s clueless Slovakian girlfriend, a cellist named Kara (Maryam D’Abo).

He also connects the general to an American arms dealer (Joe Don Baker, who would return as CIA guy Jack Wade in a couple of the Brosnan Bonds) in Tangier. We get a great snowbound action set-piece where Bond puts a Q-Branch Aston Martin Vantage through its paces — the 007 package includes laser cutters, rockets, and skis. 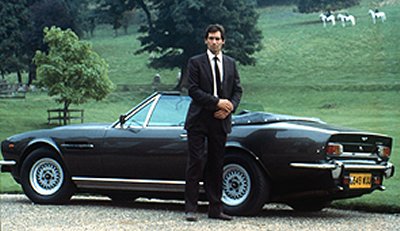 The tone is alternates wildly between lighthearted and grim, complete with blandly lit interiors and a terrible score, while the script offers too many head-scratching moments. For instance, as he’s lying to Kara and manipulating her in the hope she’ll pass on some information, Bond seems to fall for her, which really strains credulity.

The movie loses its way in the final act showdown in Afghanistan, as we discover the arms dealer is also trading in opium and diamonds. This while Bond forms an unlikely pact with the local Mujahideen leader (Art Malik) all while also dealing with a Russian bigwig, General Pushkin (John Rhys-Davies).

A Pretenders song played over the end credits is some compensation for the movie’s ups and downs, but in the end The Living Daylights (one of the strangest movie titles in the Bond franchise, incidentally) serves up too many players and too many plot holes to be anything but a middling entry. That’s not Dalton’s fault, for what it’s worth.

He’s the right age and look for Bond and is solid in the action sequences and some of the one-liners. But he also never seems entirely comfortable. At one point he says to a fellow agent after a disagreement, “Tell M what you want. If he fires me I’ll thank him for it.” That kind of bitterness could use some explanation, which we never get — not until Craig, anyway.

I was disappointed to note they recast Miss Moneypenny, too. Caroline Bliss, you’re no Lois Maxwell. 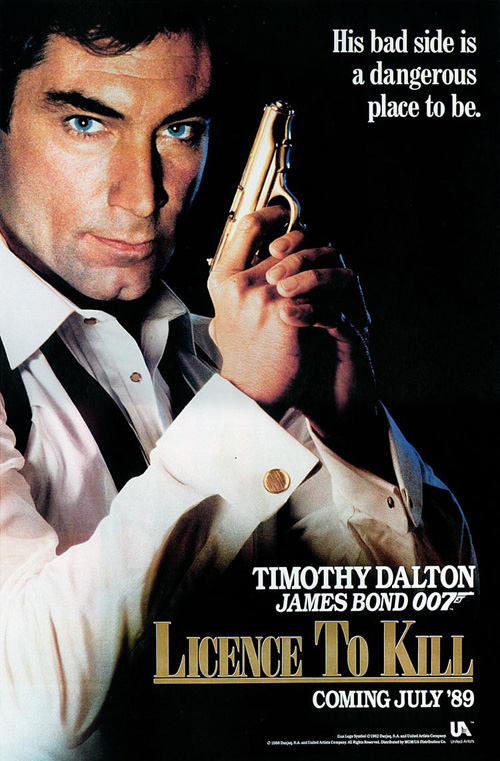 A solid premise to shake Bond out of the doldrums: 007 helps his CIA buddy Felix Leiter (Here played by David Hedison… has any fictional character, apart from Dr Who, been essayed by so many different actors?) nab a high-level drug dealer, Sanchez (Robert Davi), right before standing as his Best Man at his Florida wedding. And all this happens in the pre-title sequence, including an excellent plane grab a la The Dark Knight Rises, topped off with a skydive to the church.

But things go wrong, of course. Sanchez escapes, murders Leiter’s wife, Della (Priscilla Barnes) and puts Leiter in the hospital, courtesy of a great white shark. Bond goes looking for revenge, but has his licence to kill revoked by MI:6. Naturally, he goes rogue, tracking Sanchez to Central America and presenting himself as an asset to Sanchez’s organization. 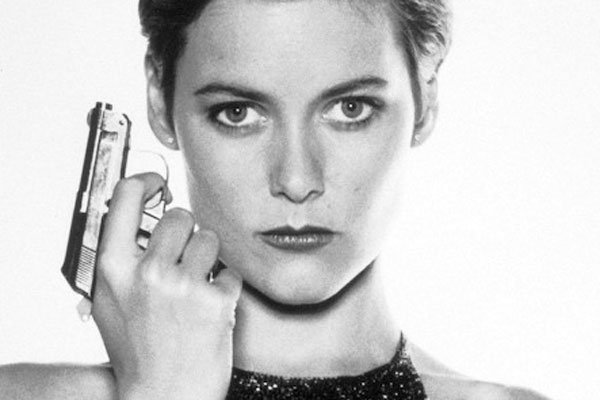 Dalton delivers a white hot rage that’s refreshing to see in the character — freed from his responsibility to the Crown, he uses all his skills to hunt down these very bad men and make them suffer and die. More than once he’s presented with more money than he could spend and throws it away or uses it to lure his quarry.

A major help to Bond and the movie is Pam Bouvier (the awesome Carey Lowell), a CIA agent who makes the first move on Bond — another nice change of pace, until he lectures her about consent. Oh, the irony. And in very weird support is Wayne Newton as a televangelist on Sanchez’s payroll.

The finale does involve a few massive explosions — a meditation centre above a secret cocaine processing facility gets taken out, along with a few gasoline tanker trucks — and we also have the pleasure of Q (Desmond Llwelyn) becoming something of a field agent, bringing in the gadgets (including a personalized gun as Daniel Craig’s Bond would later receive in Skyfall). And we get a touch of lightness with the love triangle between Bond, Bouvier, and Sanchez’s captive lady, Lupe Lamora (Talia Soto).

But while I like the Bond: Unleashed storyline, and this second Dalton is an improvement over the last outing, but it still feels a bit too ordinary. Maybe drug dealers felt more contemporary and hip at the time compared to world-conquering megalomaniacs, but there is an element of small-potatoes stakes to all of this. It’s an odd idea that Sanchez and his henchmen (including a babyfaced Benicio Del Toro, who meets a truly gruesome end) should ever have been able to make 007 sweat.

For reviews of more James Bond 007 movies, click on these links:  The Sean Connery Era, On Her Majesty’s Secret Service, The Roger Moore Era, The Pierce Brosnan Era, and the Daniel Craig Era.