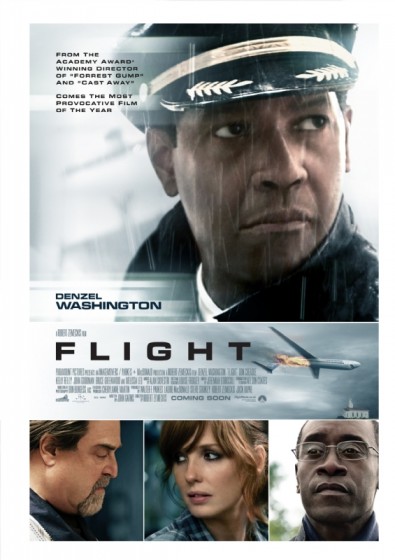 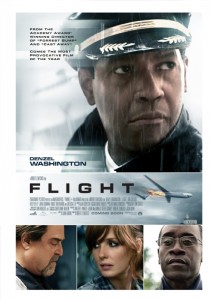 For the first time since 2000, when he had Cast Away and What Lies Beneath in cinemas, Zemeckis directs a live action drama. Originally a Spielberg acolyte, he’s one of Hollywood’s most reliable purveyors of widescreen entertainment. I certainly don’t love all his work, but I can’t deny the times when the right script found its way onto his table and he made some magic: Witness Back to the Future, and my favorite picture of his, Contact. At the same time, I can’t quite forgive him for Forrest Gump. So, that’s where I stand with Robert Zemeckis.

John Gatins, the screenwriter of Real Steel and Coach Carter, is someone else who knows about hokum. Together they’ve served up something very much within that Hollywood wheelhouse, something that manages to entertain and provide some interesting moments, but feels fatally inauthentic due to a series of poor choices.

Denzel Washington (in fine form) is Whip Whitaker, who we meet the morning after the night before. He’s a commercial pilot who’s been partying with one of his flight attendants. They have a morning flight to Atlanta, but not before he chews on the hair of the dog and does a few lines, too. The good news is he’s a bit like Dr. Johnny Fever: he gets clearer the more wasted he is. When the airplane experiences a massive system failure, he inverts the aircraft before landing the thing in a field. It’s a great sequence, and can join Knowing and Zemeckis’ own Cast Away as recent well-done air crash drama. (It’s a thing.)

Whip isn’t long out of the hospital before he’s back in a bottle, the questions start to fly and the National Transportation Safety Board launches an investigation. Nicole (Kelly Reilly), a junkie trying to get straight, hooks up with Whip after they meet in the hospital following his crash and her overdose. (We know she’s a junkie because even after the film shows us her arms, we get to hear Red Hot Chili Peppers’ “Under The Bridge” and Cowboy Junkies’ version of “Sweet Jane”. If blatant drug music was the film’s only heavy-handed narrative choice I might be OK with it, but the visual and auditory cliches come thick and fast.) Disappointingly, Reilly never really gives us much to care about, or the script doesn’t give her much to work with. I just about wrote the film off completely as terminally misguided when we see a simply terrible scene with a cancer patient throwing out little bon mots of wisdom while puffing on a cigarette in the hospital stairwell.

John Goodman shows up as Whip’s buddy and drug-dealer Harling, and he’s a joy. For a second there it looks like this is going to be The Whip And Harling Get Fucked-Up Show, a movie I’d like to see, but then Goodman vanishes. He isn’t in it enough to do anything beyond being badass to strains of “Sympathy for the Devil” and “Gimme Shelter.” Whip hides out on his father’s farm while his buddy, pilot union guy Charlie (Bruce Greenwood) and lawyer Hugh (Don Cheadle) try and sort things out and cover up toxicology reports.

It’s a dicey play Zemeckis and Washington are doing here, the problem with any drugs-and-alcohol-are-the-devil TV movie you’d care to mention. Make Whip too grim and selfish you lose your audience’s sympathies altogether. And they get close to the edge. Washington is convincing as an alcoholic: an egoist who you never quite believe has hit rock bottom, always fighting for control. I was reminded of the similar edge Michael Keaton walked in the excellent Clean and Sober.

And, of course, when Whip does come clean, he does it in the most grandiose and frustrating moment possible. I suppose it does speak to his ego that he would choose just then to be honest, but in the scene immediately preceding, we’re offered a chance to revel at Whip’s ability to successfully con everyone around him with his substance management skills. The shift in tone from comedic to sincere is painful, they’re pulling the audience in two opposing directions. We’re supposed to chuckle in the cocksure and also applaud the honesty, or, at least, find some kind of pity. I don’t think they can have it both ways.

And the fact of it is, Zemeckis isn’t good at dirty and rock bottom. He’s no Paul Schrader, is what I’m saying. He’s far too sentimental, and there’s also an airy quality to his films. I like his graceful, drifting camera eye, the lightness that really made Contact a special movie, but his manner never quite fits with this material. And while there’s no doubt Washington will get some attention come awards time for what he brings to it, Flight fails to gets off the ground. (I went there, deal with it.)