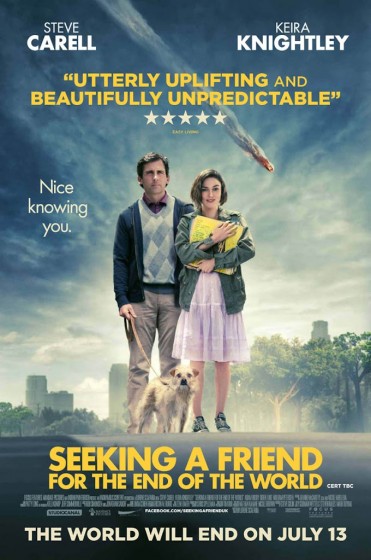 Written and directed by Lorene Scafaria

This is just out on DVD, a film I missed this summer in the din of the blockbuster season.

It’s Scafaria’s first feature, having written the delightful Nick and Nora’s Infinite Playlist, one of the few teen comedies of recent years to come anywhere near the quality of the John Hughes canon (which, as time goes on, seems better and better) without shamelessly copying from it. There were moans of disapproval when the trailer for SAFFTEOTW came out, saying that it looked just like the Canadian end-of-the-world-movie Last Night. Though they’re in the same genre, my feeling is that this one is far less concerned with realism, far less bittersweet, far more whimsical.

Here we have what’s becoming the tiresomely default Steve Carell role, he’s a down-at-the-mouth shlub who can’t quite get his act together, not unlike Frank in Little Miss Sunshine or Dan in Dan In Real Life or Cal in Crazy, Stupid, Love. As reports of an asteroid hurtling toward earth are confirmed, so people start behaving unpredictably. Everyone except Dodge (Carell), whose wife leaves him. But as he goes through the motions, hanging out with friends, going to work and to end-of-the-world parties, he gets caught up in the life of one of his neighbours, Penny (Keira Knightley, endearing).

It turns out she’s been getting his mail, including a letter from an old girlfriend, the one who got away. So, with nothing to lose, Dodge and Penny head out on a road trip to find the girlfriend, encountering all manner of End of Days weirdness along the way.

I enjoyed this slight little movie for a few reasons. I’m as much a sucker for apocalypse stories as the next guy, and this satisfied the requirements of the genre with a sweet, light touch. Despite what I wrote above about Carell, he’s likeable, and he and Knightley have an offbeat charm together. And the movie is undemanding, with cute supporting roles from some talented folks, including Melanie Lynskey, Rob Corddry, Connie Britton, Patton Oswalt, William Petersen, Derek Luke and Martin Sheen.

And I also enjoyed it because it did all the right character things in the first act, so by the time a few egregious script problems surface, I was willing to forgive it. I didn’t quite buy Penny’s growing romantic affection for Dodge—it’s not a spoiler, come on, what kind of movie do you think this is?—and I didn’t believe Dodge, who harbored an animosity toward his father (Sheen) for decades, would forgive him within three minutes. At least, not the way the scene was written.

But yeah, by then, I was happily committed to the destruction of all life on the planet, and went with it.