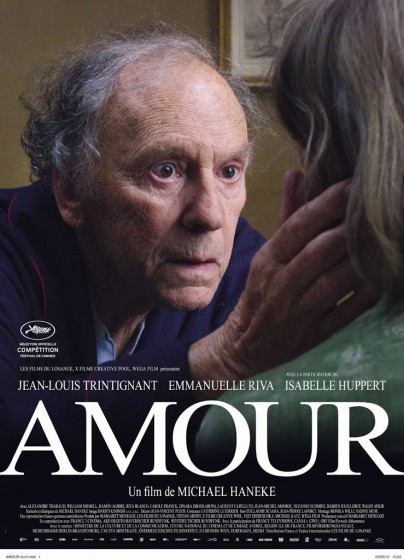 When I read the glowing reviews for this film coming out of Cannes (where it won the big prize, the Palme D’Or), it was described as about an elderly couple dealing with dementia. I wondered if it would be like Away From Her, but that film was never referenced in comparison. Makes sense, now that I’ve seen Michael Haneke’s picture. This one is very different. 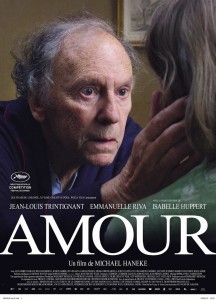 Love, or Amour, is the work of a mature and very confident storyteller. You can tell in the deliberate way the film is shot, with direct through-lines and scenes filled with utter stillness. But for one scene close to the beginning, the entire story takes place in a beautiful Paris flat, a book-filled, hardwood-floored refuge from the world. It’s a character itself, especially as there are so many medium-shots, allowing the audience to take in all the details of the surroundings.

Georges (Jean-Louis Trintignant) and Anne (Emmanuelle Riva) live here, retired music teachers with active, rich lives. But one morning Anne seems confused, the sign of a stroke, taking her movement on one side. Now Georges must care for her. She can do some things for herself, and her mobility is improved when she gets a motorized wheelchair. But she’s very unhappy, to have this burden, to be a burden, in her estimation, on her husband. She doesn’t want anyone to see her like this, even a former, beloved student (Alexandre Tharaud), or her daughter (Isabelle Huppert). And then her health deteriorates.

So, no, this isn’t about the ravages of dementia as much as it is a thoughtful, expansive film about the indignities of age and illness. Trintignant and Riva are astounding, actors both in their 80s, showing so much of themselves. Quel courage. And Haneke, who’s proved himself an intellectual provocateur in the past, here provides very direct, unblinking and unflashy cinema, allowing enough space for the audience to piece together for themselves the story, the few places where we flash back or, perhaps, enter a dream. There’s so much space to breathe in the film, throughout.

I wonder what people will make of the scenes that feature a pigeon. I’m still thinking about them myself. 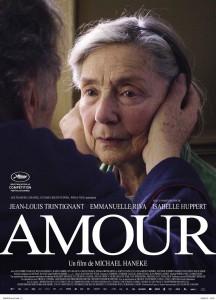 Walking out of Park Lane, I voiced a few very minor concerns about jarring transitions in the story to my cinepanion. There were places where, instead of seeing what happened—a doctor’s visit or a moment when Anne takes a turn for the worse—we hear about it later from George telling someone else. We also see George dismiss a nurse for being unkind, though we only see one scene providing evidence of her behaviour. I wanted more showing, less telling, in these moments.

But, on further reflection, I realize much of what we’re getting is through George’s eyes, and his love for Anne makes him something of an unreliable narrator. Also, as my friend pointed out, one of the film’s lessons is that life is made of many small moments strung together, one just like the other in repetition, until something else happens, and change can come very quickly and unexpectedly.

So. Wednesday. Tonight. I plan to see The Hunt. Tonight is also when Sarah Polley’s excellent Stories We Tell is screening. Don’t miss it.