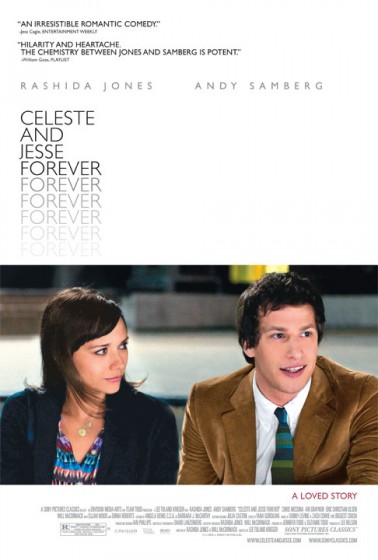 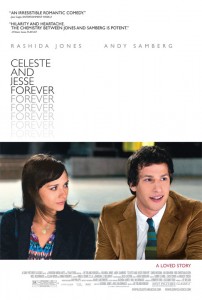 There’s that saying that if you can’t find a good job you should make one. If you’re an actor, it means writing yourself a role. That’s what Rashida Jones has done here in Celeste and Jesse Forever, a well-made indie romcom that cleaves more indie than it does romcom.

In it, Jones is Celeste. When we meet her and Jesse (Andy Samberg, a lot more emotional depth on display here than any of his SNL work suggested), they’ve got all the lovey-dovey habits of a couple who know each other really well. Except they’re not a couple, they’re separated. Supposedly. Their friends think it’s really weird that they spend all their time together even though they broke up months ago.

And, yeah, it is weird. Especially as we never really get to find out why they broke up. There’s some noise about how her success made it difficult for him (she’s a cultural trend-predictor and designer, he’s a struggling visual artist) but it seems like it was her who wanted a change.

But it starts pretty broad, and never bothers. Had this been your average romcom I would have just gone with it. But by the end of the first act, we’re spending a lot more time with Celeste than we are with Jesse, as she’s trying to understand her feelings of abandonment. You see, during a one-night stand Jesse impregnates another girl and now he’s feeling like he needs to get his act together, be the responsible new daddy. When that happens, the picture takes a bit of a turn. It becomes a portrait of sad and somewhat delusional Celeste, who never really let go of Jesse and is now forced to, going out with guys like Chris Messina, the go-to indie guy who always makes me wanna punch him when he shows up onscreen, like a young Paul Reiser. (Sorry, Chris.) Jesse disappears for long stretches of the running time. The move ceases to care much about him or what he really wants, instead introducing a teen pop star that Celeste becomes friendly with despite her contempt for the girl’s music.

Which I guess is OK. Jones is a compelling screen presence and its fine that the movie embraces her quirk and its indie-ness rather than its romcom formula of the on-again, off-again couple. But I still wondered what it was that broke them up in the first place.

I liked where the picture went and enjoyed everyone in it—with the possible exception of Elijah Wood as Celeste’s boss, he never quite convinces as the awkward gay guy—and it really looks good, too, offering a rich, dark colour palette. If in the end I felt like something was missing, I still give Jones full marks for pulling this project together for herself and offering something a little different, a little anti-formula. More power to her.