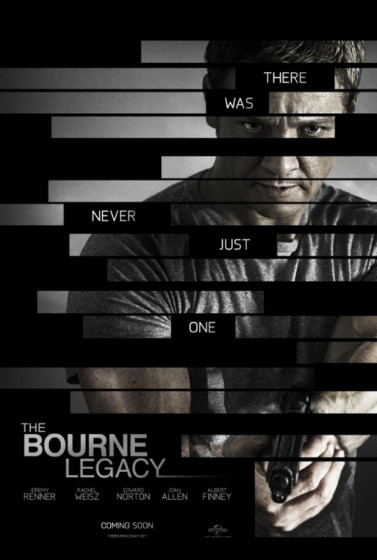 Directed by Tony Gilroy
Written by Tony and Dan Gilroy, from a story by Tony, inspired by the Robert Ludlum novels.

Tough act this one is following. The first three Bourne movies are that rare popular franchise without a weak link. Each of the films has something to recommend it, the second and third strongly following on the first. (Feel free to check out my more detailed thoughts on them.)

What this fourth movie is doing is trying to further the story without the directorial brilliance of Paul Greengrass, or the star that got them here, Matt Damon. The filmmakers’ solution is clever. Credit Tony Gilroy, who wrote the first three movies—and directed and wrote the excellent Michael Clayton—for his running with this, trying to reimagine a franchise by shifting it laterally, offering similar speed on a fresh chassis.

Aaron Cross (the pugnacious Jeremy Renner) is an agent in Outcome, one of the variety of black-ops programs being run by the US Department of Defense. In the first three pictures we heard about two others; Treadstone, a project that trained and brainwashed very deadly men, and Blackbriar, that seemed to pretty much do the same thing. Outcome has also a number of internationally placed agents, though these are the product of a program of genetic testing, producing mental and physical improvements requiring regular meds to sustain. When we meet him, Cross is out in the snowy woods somewhere and has lost his pills.

We also revisit the events of the third movie, The Bourne Ultimatum, with a few added scenes to link it with the people in charge of Outcome, an admiral (Stacey Keach sans ‘stache) and a colonel (Edward Norton at his most weaselly). With the Bourne publicity in New York, they worry their program will also be compromised. Shutting it down means killing everyone who knows about it, including the geneticists. Here’s where Dr. Marta Shearing (Rachel Weisz) comes in, a lab rat who narrowly avoids getting her head blown off before Cross can save her. She can lock in the effects of the coding with a virus so he won’t need the pills. They’re off across the planet, with the bad guys right behind them.

If this franchise has excelled in deft, cold-war-styled spy thriller tropes married with bleeding edge action and effects, it’s also provided cinematic locomotion that’s influenced many a filmmaker since looking to marry high-tech with big bangs. Aesthetically, Gilroy has kept up. Without slavishly copying Greengrass’ herky-jerky, immediate camera style he still manages the intense cross-cutting in the action sequences, adding for good measure a big motorcycle chase (that goes on a little too long, mind you) and a rooftop footrace (all in Manila, a fresh locale for Hollywood to burn). You know you’re watching a Bourne movie throughout, not some cheap knockoff, and props to Gilroy for pulling that off.

Where his Legacy doesn’t quite reach its predecessors is in the core of emotion. Cross is a blank slate, an assassin like Bourne with some of his sensitivity but none of his depth. Cross wants his pills and he wants to stay alive, but otherwise doesn’t have Bourne’s moral shock at realizing he’s a killer, nor his fear and desperation. Renner is watchable, and believably physical—a few hand-to-hand moments he has are a whole lot of fun—but a lot less likeable than his Avenger, Hawkeye, despite much more screen time.

And those pills, we don’t really find out until the middle of the second act how important they are, or what might happen if he stops taking them for awhile. It’s a missed opportunity for suspense.

Weisz is great. She always raises the material, never playing a false note. Because Cross lacks complexity, her emotional stuff really glows, and we wind up caring a lot more about her than we do about him.  One of these days I’d really like to see a female agent in the centre of a Bourne movie. (Oh wait, that was Haywire.)

And, in the end, the connections with Bourne and Treadstone seem a bit superfluous. Sure, the people at the top of Outcome got paranoid because of what happened with the publicized rogue agent, but the constant reminder of the third film felt a little shoehorned. If I didn’t know better, given how many times they mention Jason Bourne, I would have thought he’d show up, like Harry Lime at the end of The Third Man. There’s a dramatic absence when he doesn’t.